On a late summer Tuesday night I took BART (why do they call it "Bay Area Rapid Transit" when it's not fast?  Should this rail system be called BAT???) to Oakland's Rockridge station to convene with some pals at the restaurant called " Ct" at 5478 College Avenue.

SuperJeremy was the first to arrive and I barely recognized him (since he had cut his hair and he actually had a not-yet-lost-at-sea cell phone).  Host Jeff Berlin opened a bottle of 1997 Bollinger Grande Anne and we began our whirlwind "tour" of the Ct cellar and kitchen!

Jeff had decanted a few wines and left them to "breathe." 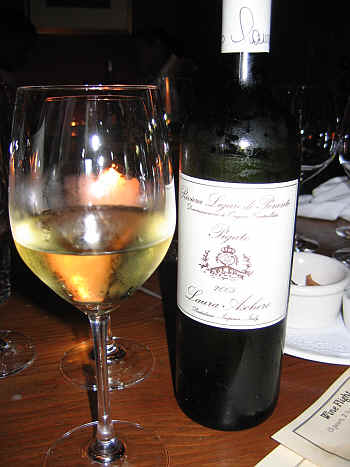 We had a nice little Ligurian white, a Pigato from Laura Aschero.

We had a grand bottle of Droin Chablis.

This was followed by a salad of Heirloom Tomatoes.

Moroccan Chicken in Phyllo
with Mint Yogurt and Carrot Salad.

How about some Erbaluce from Piemonte?

Seared Scallops with Nantes Carrot Risotto and a Sorrel Sauce.

Some sort of pizza creation...

Nothing arouses or elicits a smile like a good looking young woman wearing a dirndl.

Jeff and Charles show the secret "handshake" for their mutual admiration society.

Meanwhile, the kitchen sent out some cheeses.

This was followed by a Tarte Tatin with Vanilla-Mascarpone Ice Cream.

More people showed up at the table and soon the whole place was one big party!

Zidarich Terrano from the Carso region near Trieste.

Valentini's Cerasuolo and a Radikon red...

Since we had not had quite enough wine at this stage (did I mention the Burguet 1988 Gevrey Chambertin or the 2003 Tignanello?), we had a fabulous Austrian red from Walter Glatzer.

Jeremy, who still had his cell phone, was carefully tasting and making notes.

This is when things went hay-wire.

Ct staffers began arm wrestling.  This gal kicked the crap out of the poor fellow in the red shirt.

He was all perspiring and straining and she had not broken a sweat.

Then there was some weird sort of ritual where staff members have to wrestle the boss.  This fellow, on his hands and knees practically, has some strange sort of gizmo sticking out of his head.

When things got down to this, Charles, Jeremy and I made a bee-line for the door, claiming the "last train was arriving momentarily."

With Jeff pinned on the floor for the requisite three second 'count,' we bid everyone "adieu" and made tracks for the BART station a couple of blocks away.

A big "THANKS" to Jeff and his remarkably capable staff and crew members who took such good care of us on such a busy week night!

We look forward to dining at Ct on a night when there's less wrestling.


BACK TO THE FIRST "FOOD, WINE & FRIENDS" PAGE