A few people met on a Tuesday night at this new dining spot in downtown Palo Alto, Zola.

The participants were asked to bring a bottle of either Premier Cru or Grand Cru Burgundy...and so here are the bottles of red wine we found on the dinner table. 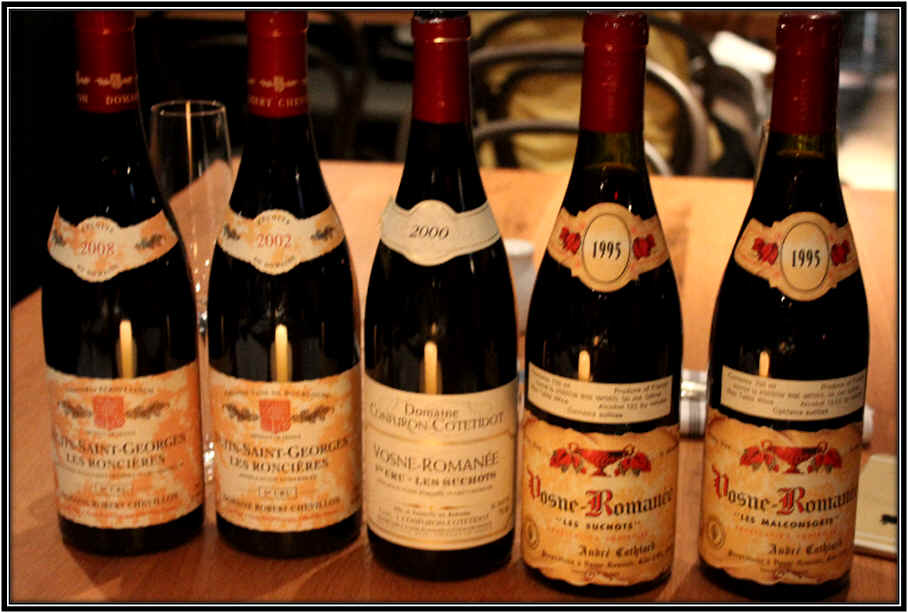 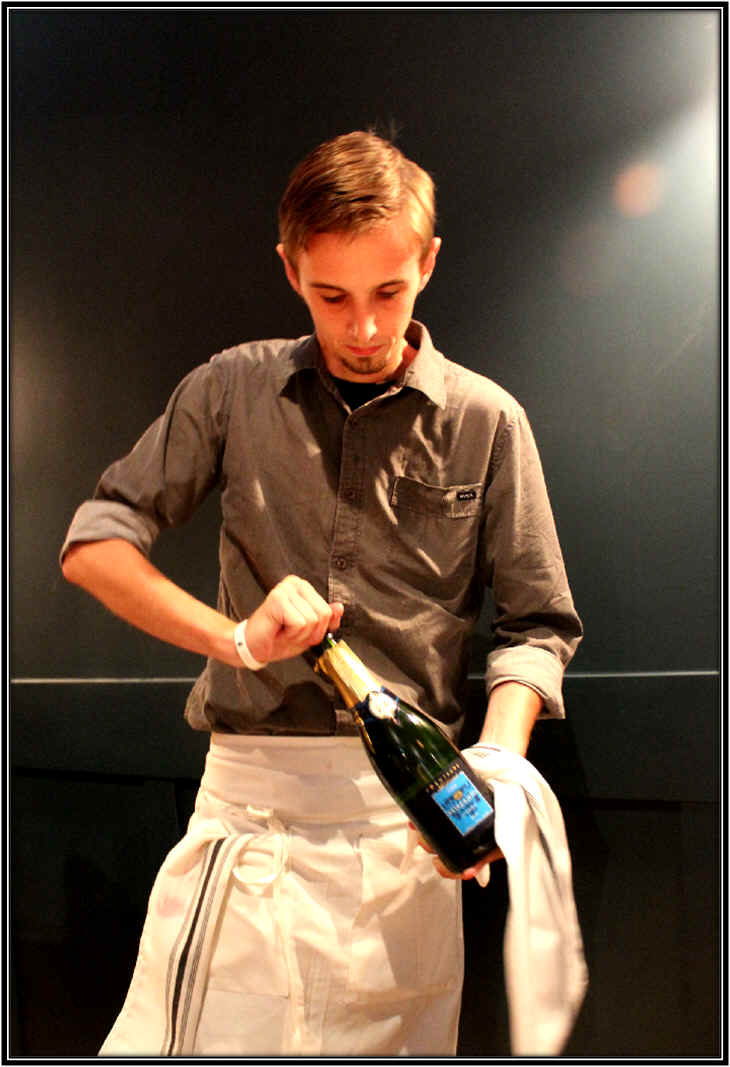 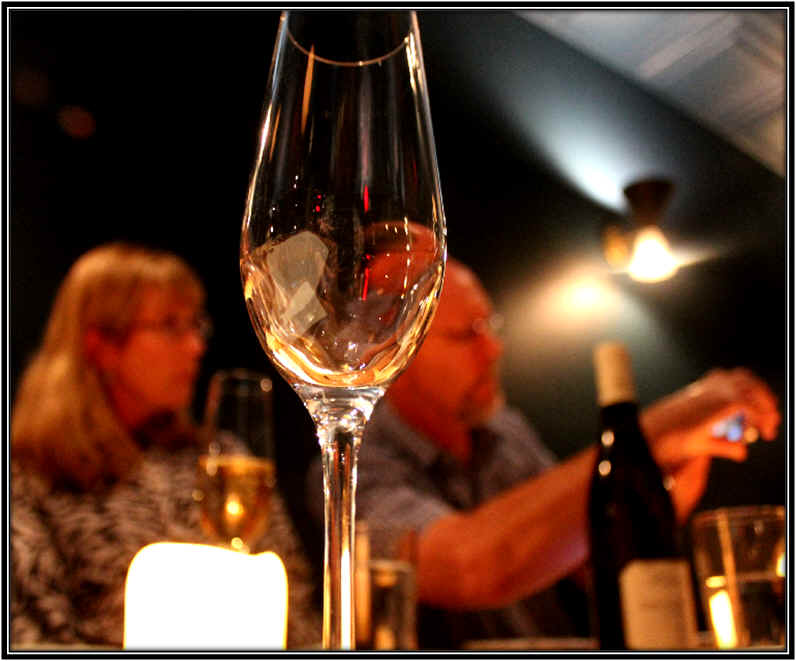 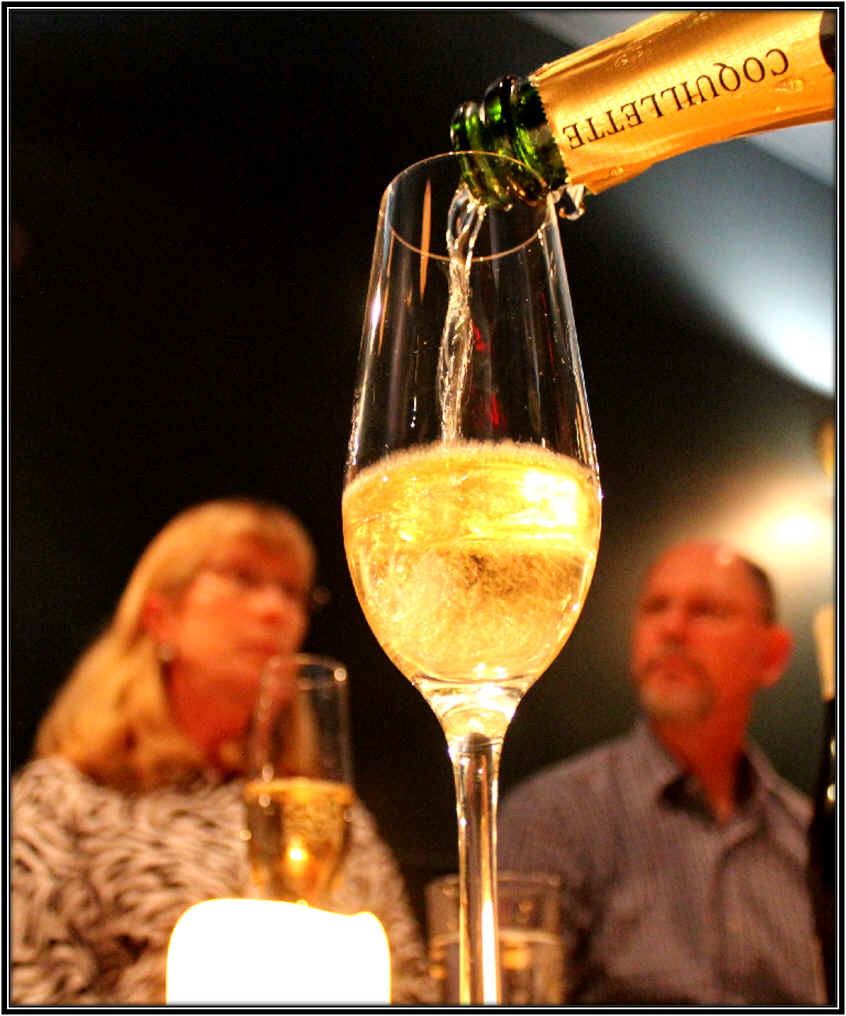 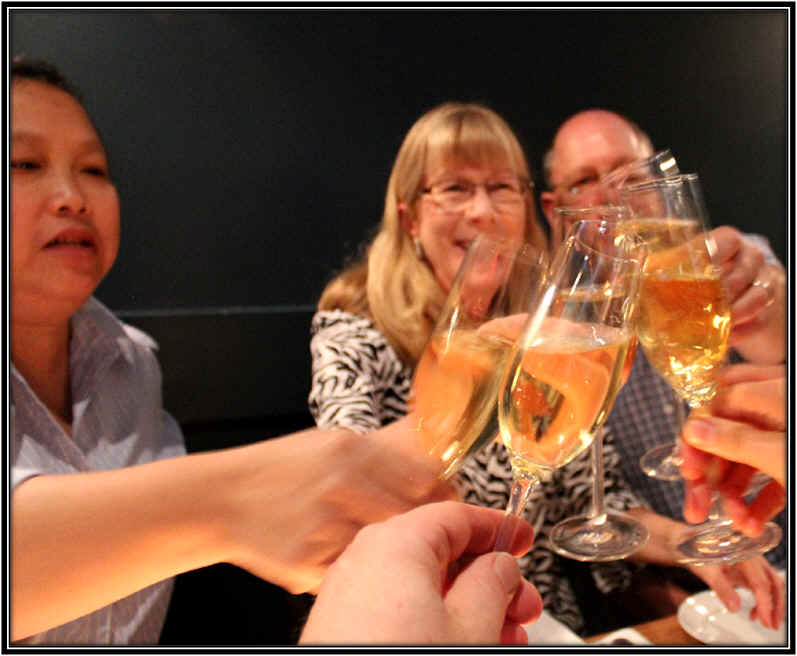 We had a nice toast with the 2004 Stéphane Coquillette Vintage Champagne...it's said to be 2/3s Pinot Noir and 1/3 Chardonnay...lots of baked apple sort of fruit to this wine.  It's a nice Champagne though only mildly yeasty given it spends at least 3 years on the yeast and has had a few years "on the cork."
Although, of course, fairly acidic, I wondered if the dosage here was a bit high to counter the tartness...

Chef Guillaume Bienaimé took good care of our little group.  The restaurant only opened a few weeks prior to our visit, yet service and cuisine were smooth throughout our evening of perusing gastronomical and enological delights. 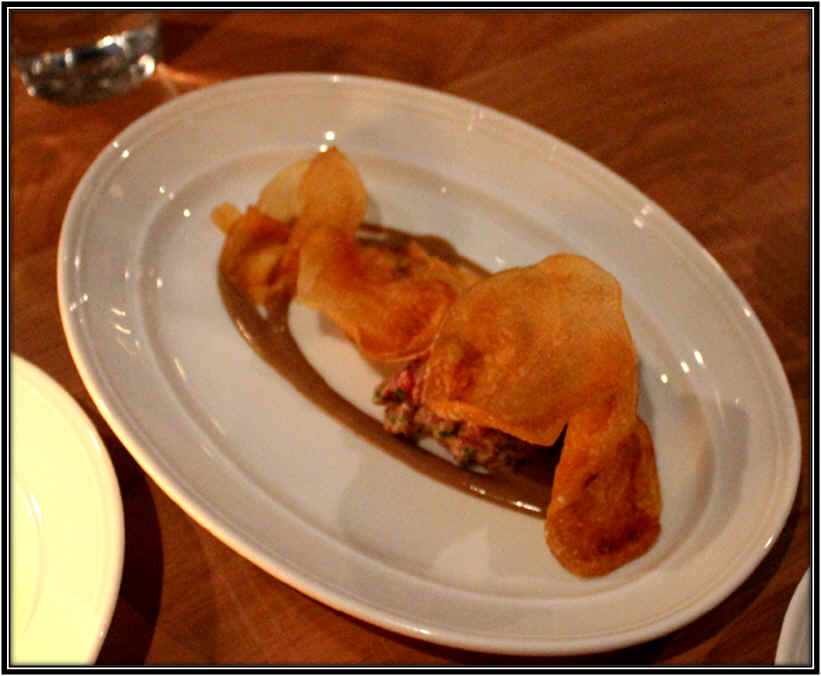 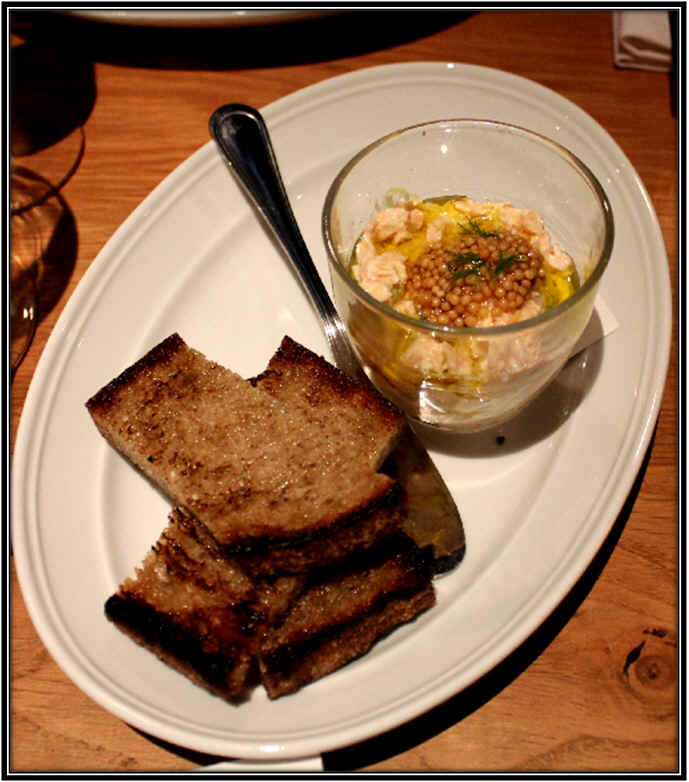 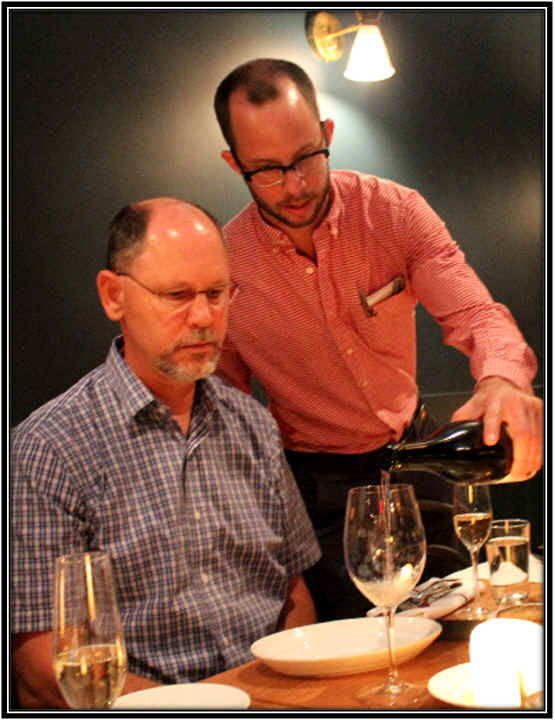 Alan brought a nice bottle of Saint-Aubin from Hubert Lamy, a 2011 vintage, from the Clos de la Chateničre. 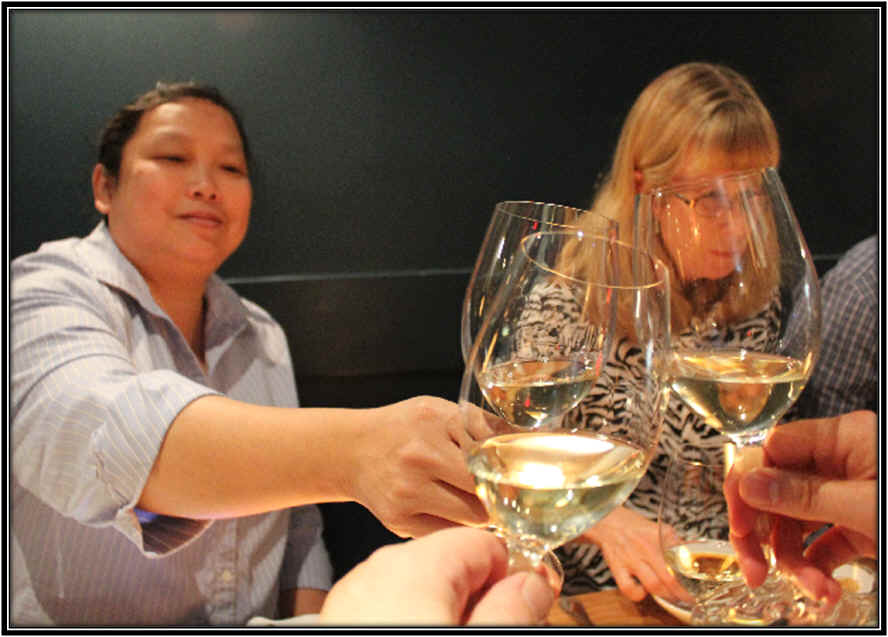 This was a classic white Burgundy and a good example of Lamy's winemaking.  It was mildly toasty and quite dry...medium-bodied and very fine on its own and even better with the Sea Scallop appetizer they prepared for us. 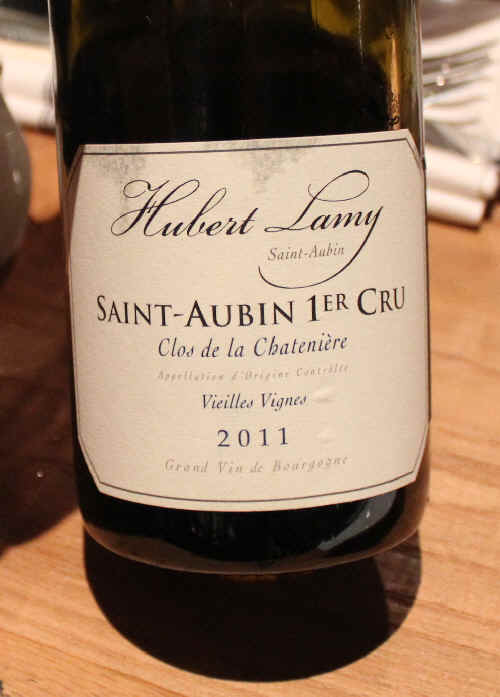 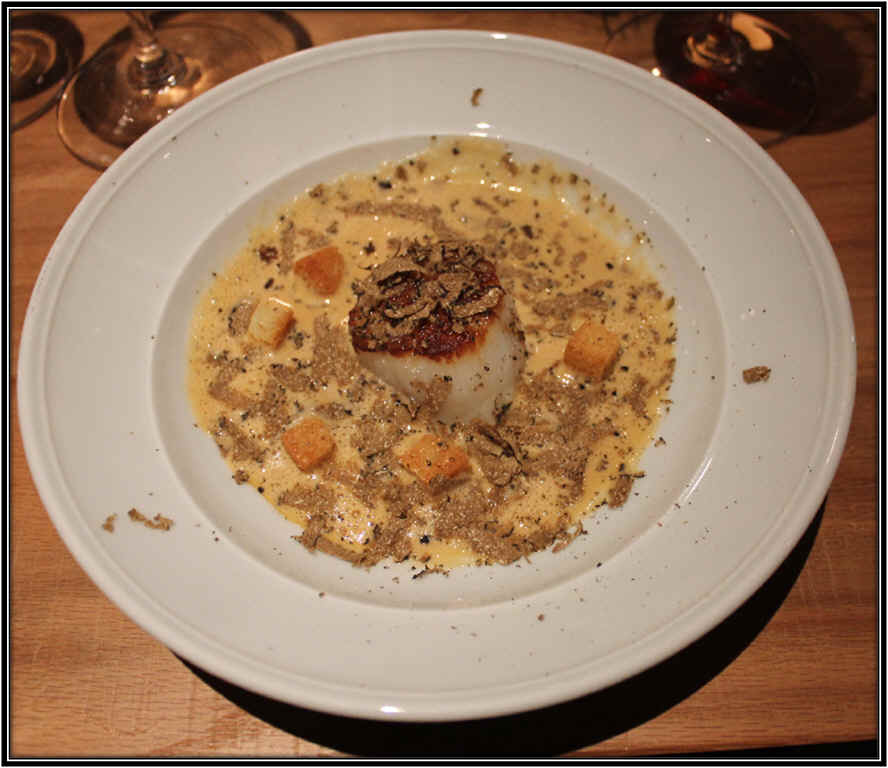 The sauce was beautifully intense, with deep flavors and a rich texture.  And yes, those are truffle shavings adorning this dish...talk about gilding the lily!
We asked for some bread to sop up the sauce...the other 'sauce' we sopped up directly from the wine glass, however.

The first red to be circulated around the table was this one: 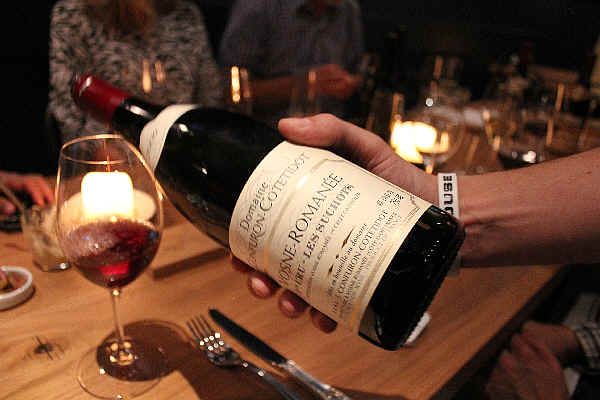 The 2000 vintage of Confuron-Cotetidot Vosne-Romanée "Les Suchots" was a rather elegant rendition and fairly typical of what I've found from this small estate.  Usually the wines have been a bit earthy more than fruity, though this was mildly cherryish with a faintly floral note.  Oak is not apparent in this wine and it was perfectly pleasant and nicely "Burgundian."  I'd say this can still be cellared for a few more years, though it was perfectly drinkable on this occasion.

We wanted to open the various reds to allow them some breathing time...the two 1995 Vosne-Romanee wines from Cathiard had a far bit of "scuzz" on the top of the corks. 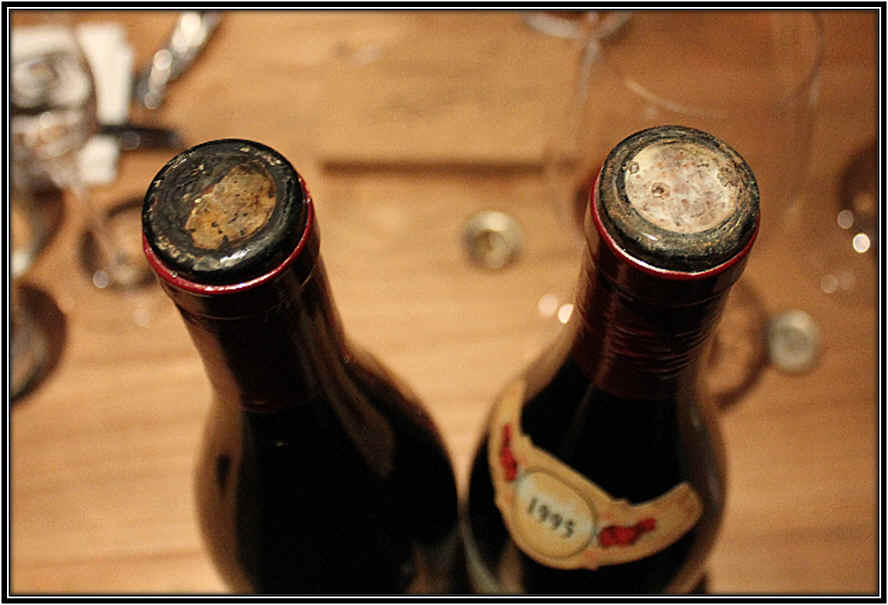 For the greenhorns lurking out in cyberspace, this is not an unusual occurrence.
A wet napkin or warm, moistened towel can help clean up the top of these bottles.
We have had people return bottles in this condition to the shop, being certain the wine inside the bottle is tainted or impacted by such a cork.
In fact, you can never determine the quality of such bottles until you extract the cork and pour the wine into a glass.

We were opening these shortly before serving them, so we decided to decant the wines to allow them to 'breathe' a bit more rapidly than they would in a bottle with such a small surface area atop the wine.

The Short-ribs Bourguignon are presented in a Cocotte... 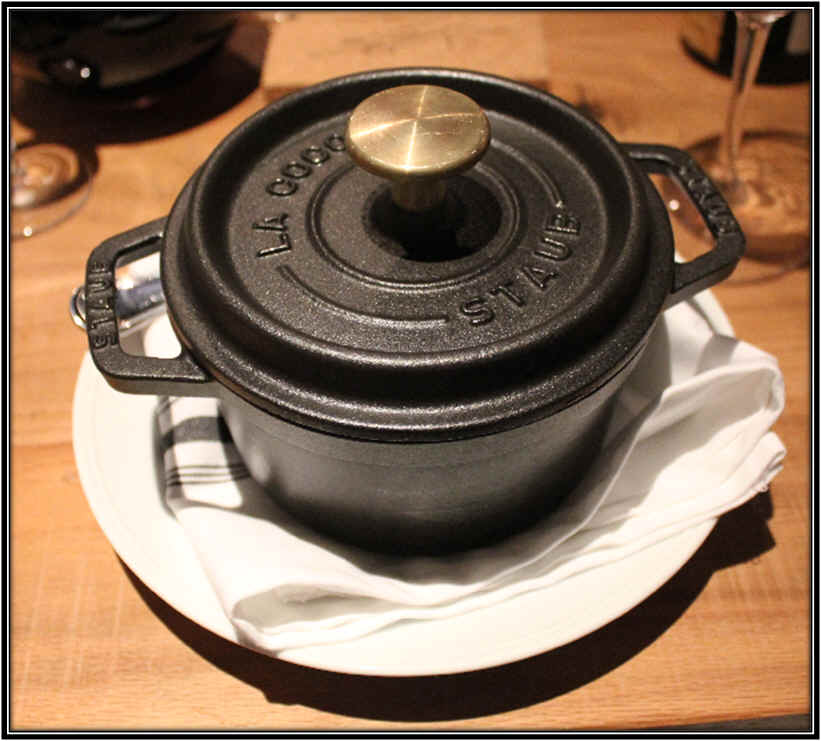 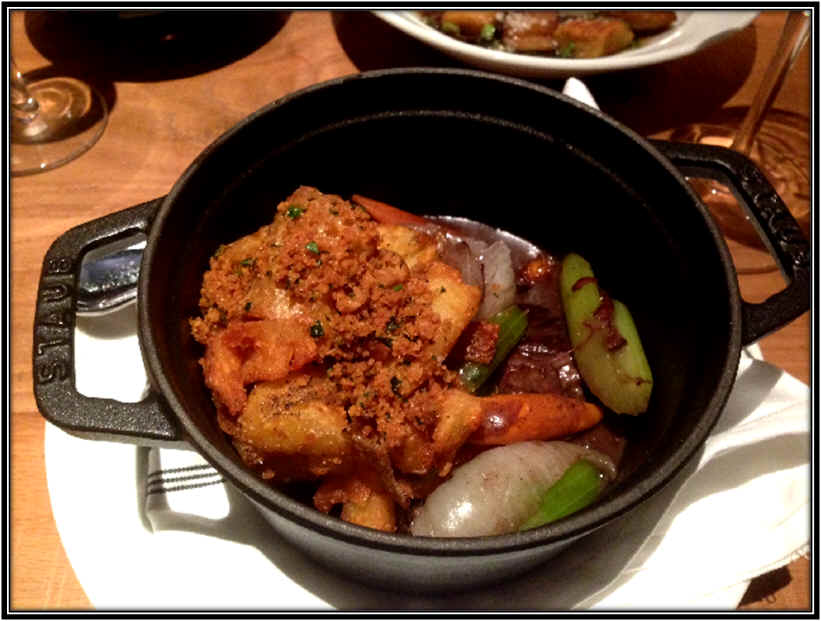 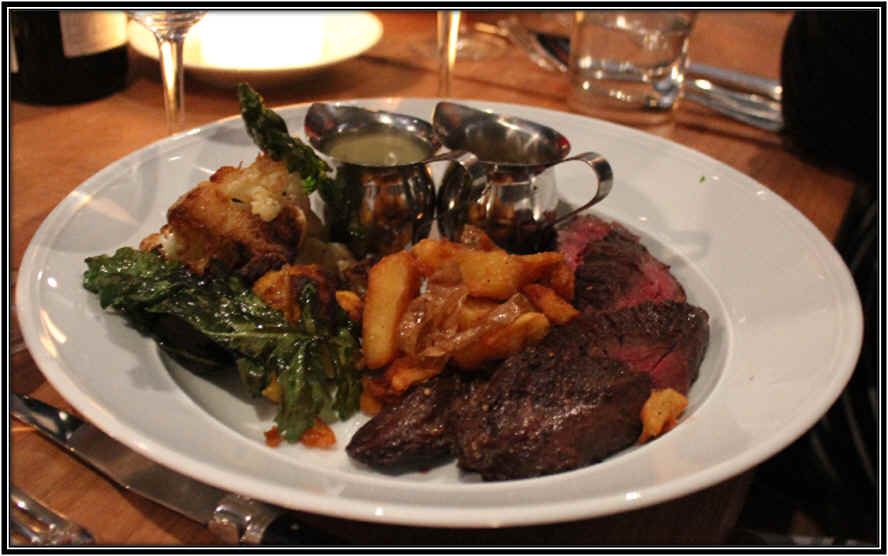 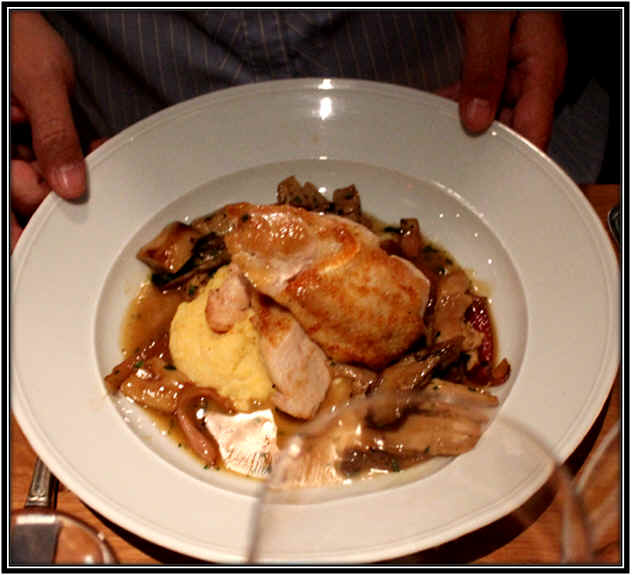 Supreme of Rockies Chicken with mushrooms... 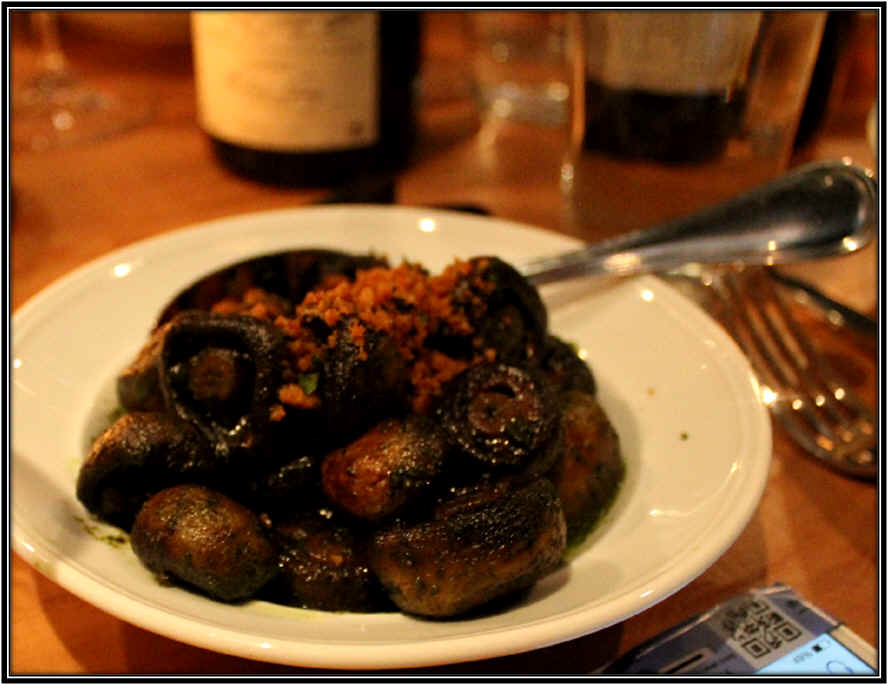 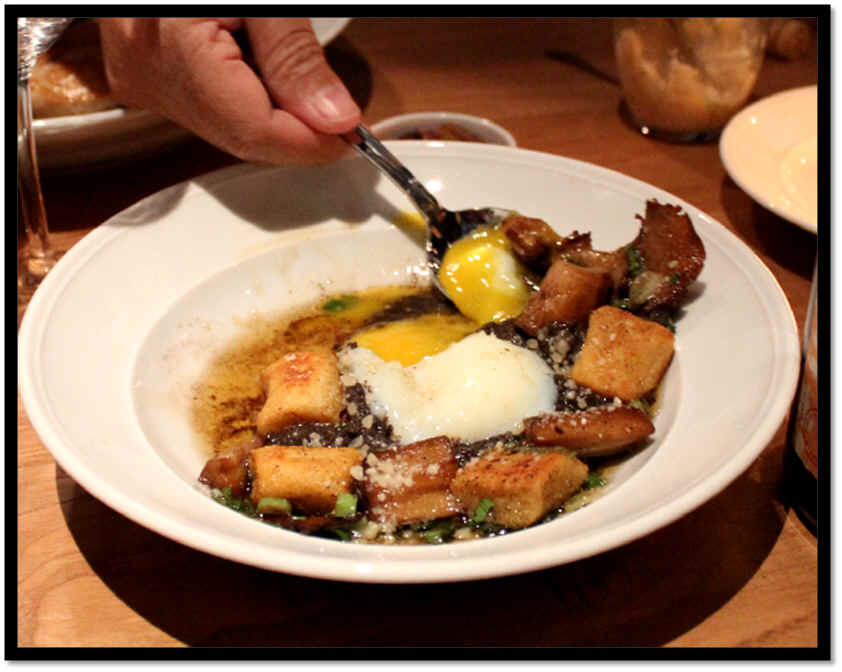 Ricotta Gnocchi with a "slow egg," mushrooms in brown butter...

We made our way through the various bottles of Burgundy...

2008 Robert Chevillon NSG 1er Les Roncičres was a nice example of good, cellar-worthy red Burgundy.  Cherryish notes and a touch of wood, but still a bit tight and muscle-bound.  This needs time to unfold and show itself, but at this stage it's certainly promising.

1995 André Cathiard Vosne Romanée 1er Cru Les Suchots was a "good" bottle of Burgundy, but I did not find it to be a really stellar bottle.  Nice fruit...mildly cherryish with a hint of plums and a faintly floral aspect to it with light woodsy notes.  It was medium-bodied and reasonably ready-to-drink.  I'm not sure it would develop additional complexity with cellaring, but probably would maintain on a plateau for another 10 years, well-stored.

1995 André Cathiard Vosne-Romanée 1er Cru Les Malconsorts seemed a bit less polished than the Suchots.  For a vineyard that's close to La Tache, I can't say this comes close to rivaling that vaunted Grand Cru!  This was another "pleasant" bottle of Burgundy, but it was not a hugely memorable wine. 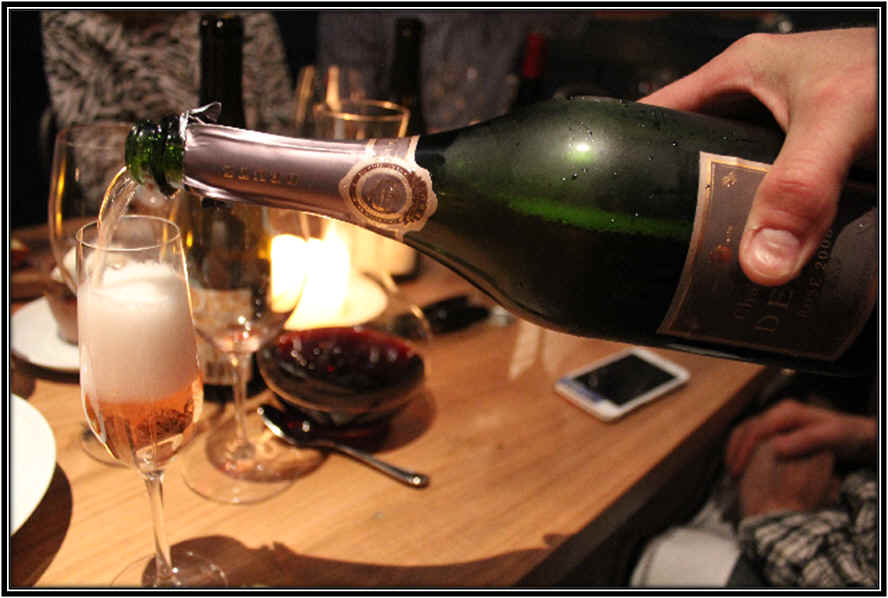 To refresh our palates, Connie had brought a 2008 Deutz Brut Rose and this was just what the doctor ordered!  It was light pink/copper in color and nicely fruity with red berry notes on the nose.  The wine hit the palate with precision and crispness, being very dry and mildly austere.
It sure perked up the palate for the small parade of desserts which followed! 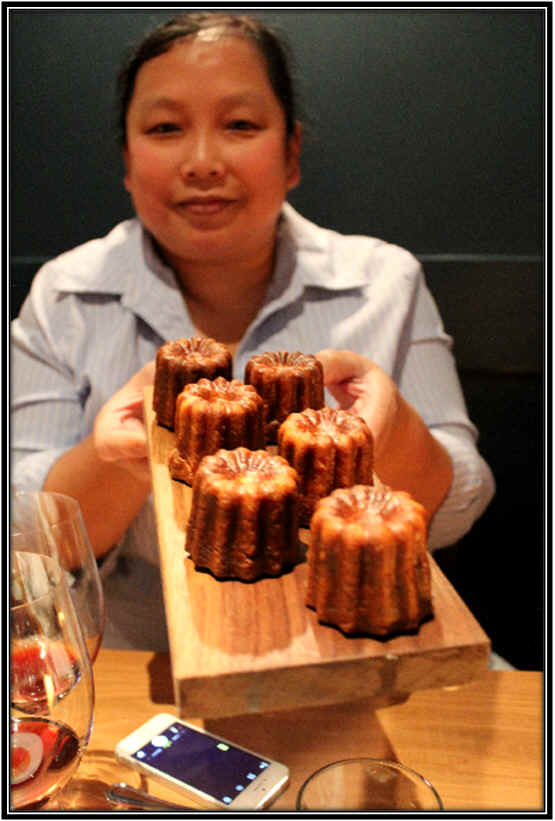 Slightly afield from Burgundy were these lovely Canelés (de Bordeaux)... 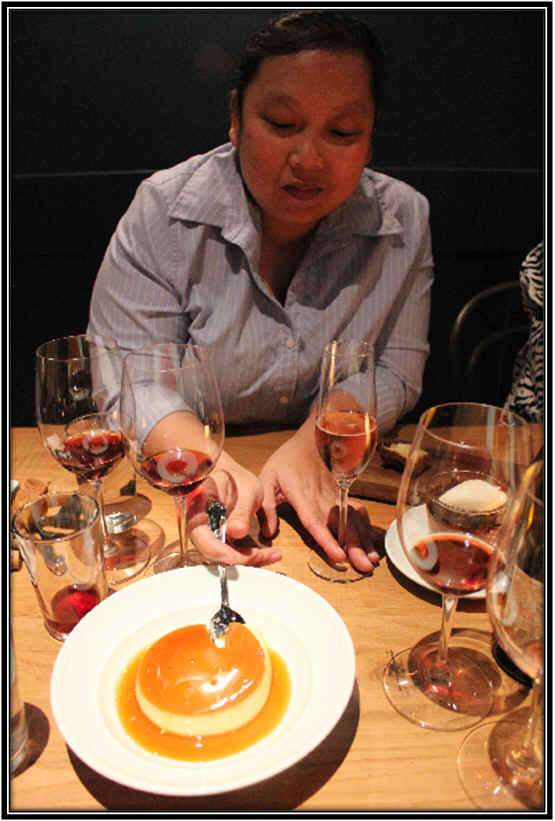 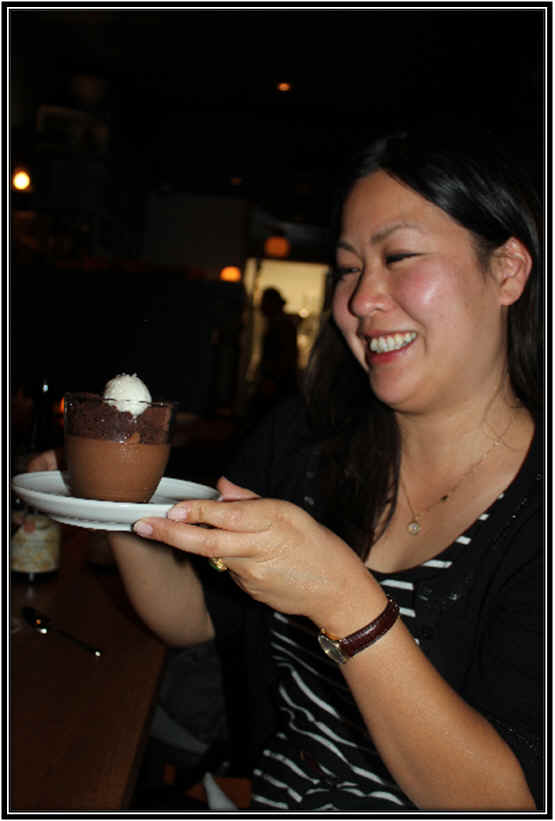 BACK TO THE FIRST FOOD, WINE & FRIENDS PAGE