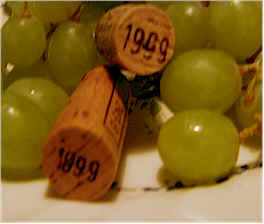 The word "Chardonnay" has become synonymous with "white wine" here in California.  People seem to buy virtually anything labeled "Chardonnay", whether the wines actually taste like Chardonnay or not.

In fact, I often wonder whether the average bear can identify the character of Chardonnay.  This is because many wines produced in California are subjected to so much oak, either in the form of real barrel aging or some sort of oak "flavoring" (new staves being introduced into a barrel or tank or oak chips or sawdust being added  --  the laws don't require a winery to disclose this on the label) that an unwooded Chardonnay doesn't "taste" like Chardonnay to Yogi or Boo-Boo.  Similarly, I have noticed that many tasters describe other white wines as being "Chardonnay-like" when these are dominated by wood.

The first really important work in marrying oak with Chardonnay in the traditional style of France's Burgundian winemakers started with the Hanzell winery in Sonoma.  This was back in 1957, when James Zellerbach imported French oak barrels for the aging and maturation of his Hanzell wines.  Wonder of wonders!  Oak!!!

It's taken many years for winemakers to learn how to use oak in making wine.  Some of them use oak as a crutch, propping up weak, thin wines and overloading them with wood.   Others employ a combination of wood and residual sugar to give character to wines which are malnourished, wimpy wines.  Many of these are quite popular, even "scoring" highly with those who claim expertise in judging wine.   McDonald's hamburgers are quite popular, too, but few would say those are the best examples of beef on the planet.

We enjoy a nicely oaked Chardonnay---don't get me wrong.  I have been accused of liking the most woody tasting wines.  I cite Napa Valley eno-scribe Bob Thompson who once wrote something like  "My parents marveled that, as a boy, I ate the fruit and not the tree."  He was poking fun at those who prefer Chardonnays with so much wood that determining if the beverage was actually made from grapes is impossible. 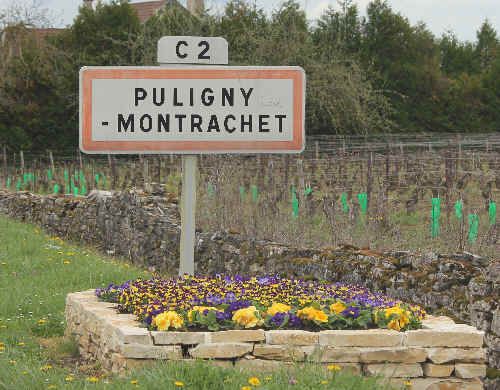 The Chardonnay grape finds its home in France's Burgundy region, though it also is cultivated in Champagne.  In Burgundy's Cote d'Or, the major appellations of Puligny-Montrachet, Chassagne-Montrachet and Meursault account for the top wines, but other villages turn out good wines, too.  The best Cote d'Or producers barrel ferment the juice, using, at least, a percentage of new oak cooperage.  The wines are often aged on the spent yeast and this sediment is stirred in barrel, contributing a toasty, smoky element to the wines.  As the juice tends to be rather high in acidity, most winemakers induce a secondary fermentation (called a malolactic fermentation).  This reduces the acidity and makes the wine rounder, creamier and somewhat buttery in character.

California vintners make a full range of Chardonnays.  At the low end you'll find wines from the "hotter-than-hell" Central Valley where tonnage is high and the intensity of character is low.  On the higher end, you'll find wines from cooler, coastal climes, from low-yielding vineyards which can be sublime.  Some wineries make light, crisp, "simple" Chardonnay, while others attempt to emulate the top wines of Burgundy.

Some winemakers liken Chardonnay to a blank canvas. The character of the Chardonnay grape is dependant upon its origins, clonal selection, soil type, exposure, etc.  The "seasonings" bestowed upon it during its maturation (oak, secondary fermentation, etc.) further determine the character of the wine.  Some old clones of Chardonnay display a mildly appley note.  Newer ones seem to have a more tropically-fruity quality.

Diversity and individuality are what make winetasting fun and challenging.  Don't fall into a rut!   Be adventuresome and experiment with Chardonnays from different regions and unknown producers.

There's a small company that owns a wonderful vineyard in Napa Valley called Blackbird.  They make a few high-priced red wines...Merlot...$50-$150 a bottle.

A few years ago they had a killer Chardonnay called Resolute...well-priced and damned good.  The following vintage took a new brand name and the wine was quite different from its first release.

We tasted a new bottling and it's a good example of California Chardonnay...it's aged in new and used French oak along with a small fraction in stainless steel.  The overall oak impact is fairly mild.  We might personally prefer a more toasty or smoky character, but this sort of wine seems to have a large audience here in the shop...it's dry and a good example of Chardonnay for a reasonable price.

((We tasted a number of modestly-priced Chardonnays the past few months...most are weak to undrinkable...))

We've long been fans of Pedroncelli's single vineyard bottling from the Frank Johnson vineyard in the Dry Creek Valley.   This vineyard is actually along the border of Dry Creek and Russian River appellations.

The Pedroncelli's have usually made a terrific wine from this fruit and each vintage is seems to improve.

The 2019 is delicious.  The wine undergoes full malolactic fermentation and it's creamy and mildly toasty...lots of ripe apple notes with a touch of a spice note.  Dry, of course.

Post-Script:  We stopped by the Pedroncelli winery in February of 2017...having visited a number of other wineries on our little tour, we had tasted a bunch of Chardonnays, all of them priced between $40 and $75.  Ridge Estate Chardonnay, at $50, was the best of the tour, but Pedroncelli's Frank Johnson bottling was a winner, doubly so given its modest price tag.
Currently in stock:  2019 PEDRONCELLI Dry Creek Valley "Frank Johnson Vineyard" CHARDONNAY  Sold Out...they did not make this in 2020...dang! 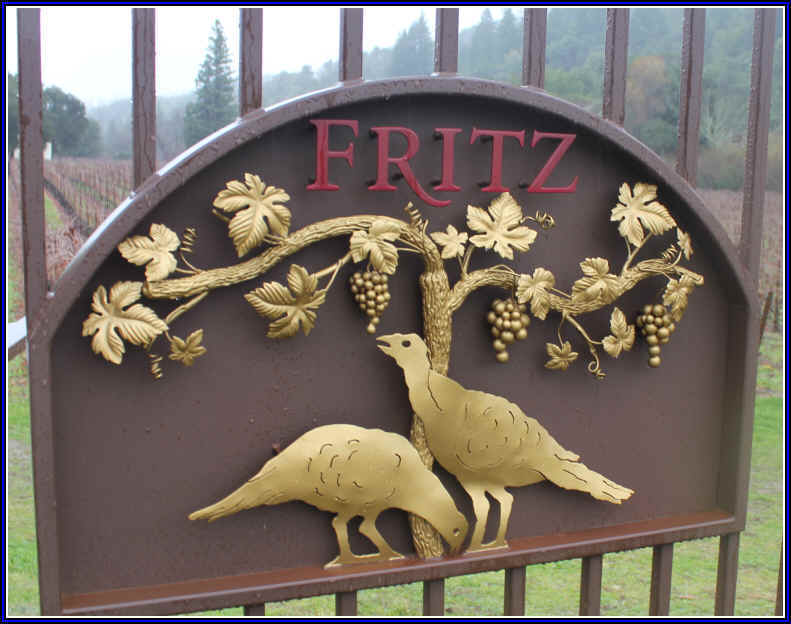 The late Jay Fritz was in the shipping business, once upon a time, and he started a little winemaking enterprise in the late 1970s.

They began with much fanfare and made some really good wines back in the early days.  Over the years they had some challenges and changes in winemakers which didn't "help."

The past few years we've seen them get their sea legs back and a number of their wines are quite impressive and they have attractive price tags.  Jay's son Clay has been running the show for some years now and they seem to produce consistently good wines.

His 2017 Chardonnay garnered some positive review somewhere and suddenly they were selling a lot of wine due to the increased demand.  Wholesale buyers, unable to taste and evaluate wines on their own were delighted to take the opportunity to offer a wine to their customers, buoyed by some numerical score which suggested the wine was extraordinarily good.    We liked the 2017, but found a shade or two less wood that vintage and so the wine was a bit less along the lines of typical Fritz Chardonnay.

The 2018 Chardonnay is a bit bigger and does have a nice touch of wood to it.  There's the usual notes of Meyer lemon and Granny Smith apples combined with a toasty note from the oak.  If you visit the winery, the price tag is $35. 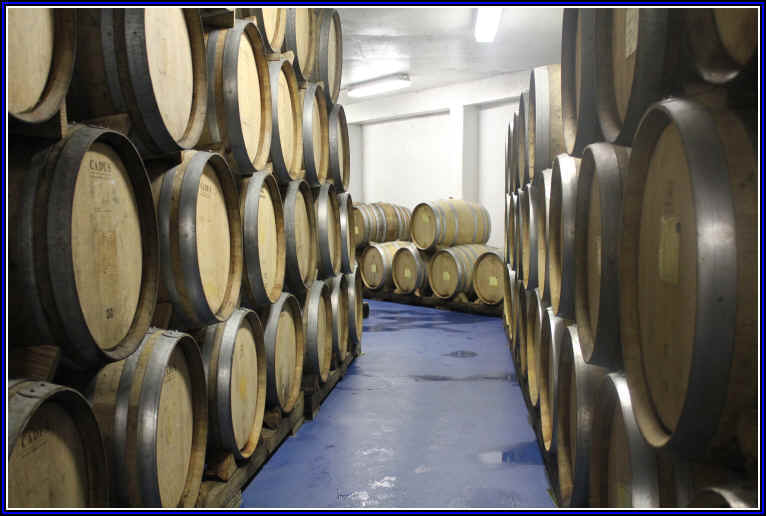 OKAY...NOT FROM CALIFORNIA, BUT GOOD CHARDONNAYS:

We've long had this little French white Burgundy stacked by the case in our shop.  It comes from the Lamblin family in France's Chablis region and, as you might expect, it's styled along the lines of a crisp, mildly flinty white wine.

You won't find any sweetness here and it's not an oak aged wine, either.

Nothing fancy but for a really solid weeknight Chardonnay, this is the house favorite of many people in our neighborhood. 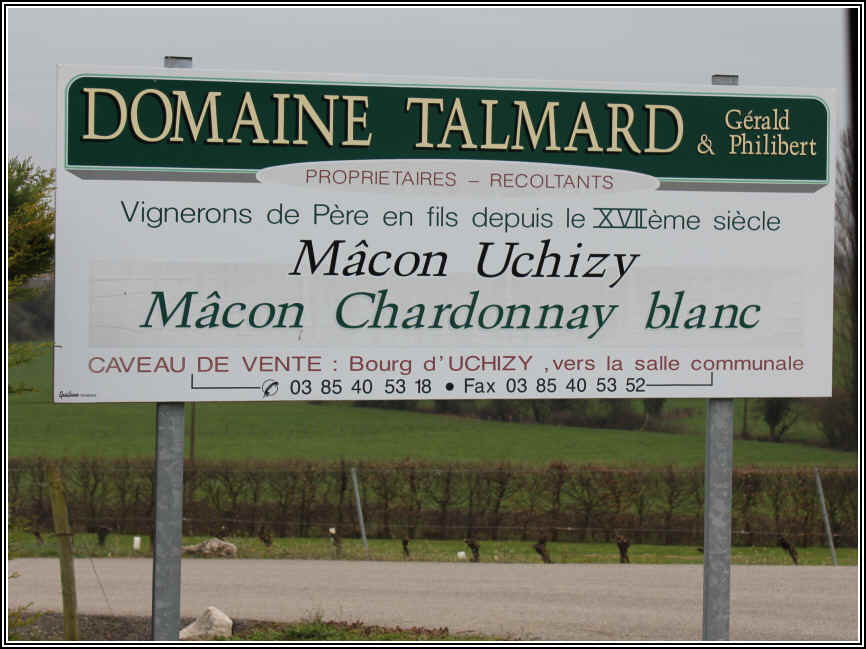 A few years ago we stopped in to see the Talmard winery as we were visiting Beaujolais and Macon.  Monsieur Talmard was blown away to have someone come 6000 miles to say hello, see the place and have a sip of Macon.  Most of his visitors come from within a 25 kilometer radius and they carry away bottles and cases of wine.

"Why did you come visit?" he asked.

I explained that we've been selling his lovely little Chardonnay for several decades and as I was traveling through the region on my way to several other wine regions, I simply had to visit this font of Macon.  Well, we were also hanging out with friends from the Macon region and dining together.
"But there's nothing to see." he said.  "It's just some tanks, some bottles and a non-descript winery building." 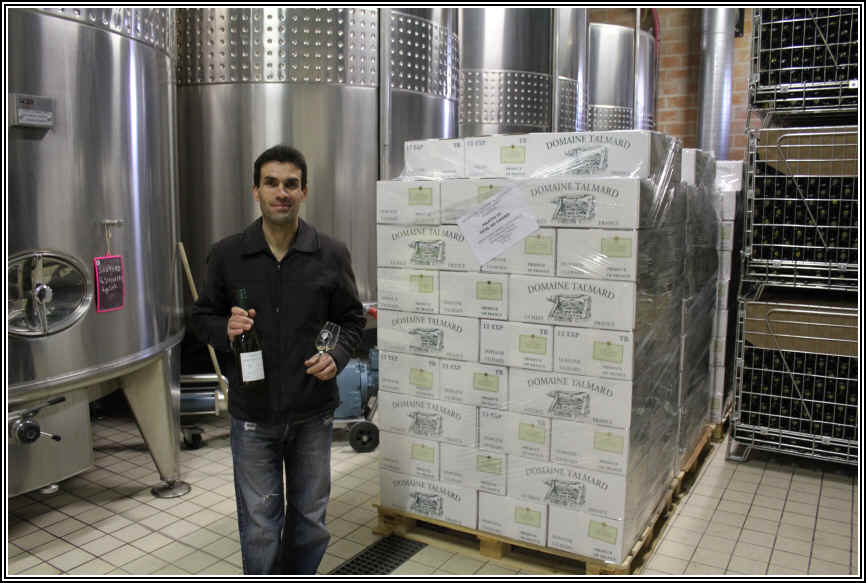 We told him we'd sold hundreds of cases of Talmard Macon and I just wanted to say "thanks" for making a good wine and offering it for a modest price.

Every year we taste Talmard Macon-Chardonnay and it's routinely a delight.  Nothing fancy, mind you, but it's solid, easy-to-drink Chardonnay.  And affordable.  Talmard is not getting rich making this wine and neither are we, as we sale-tag it in hopes people will want to discover other French whites. 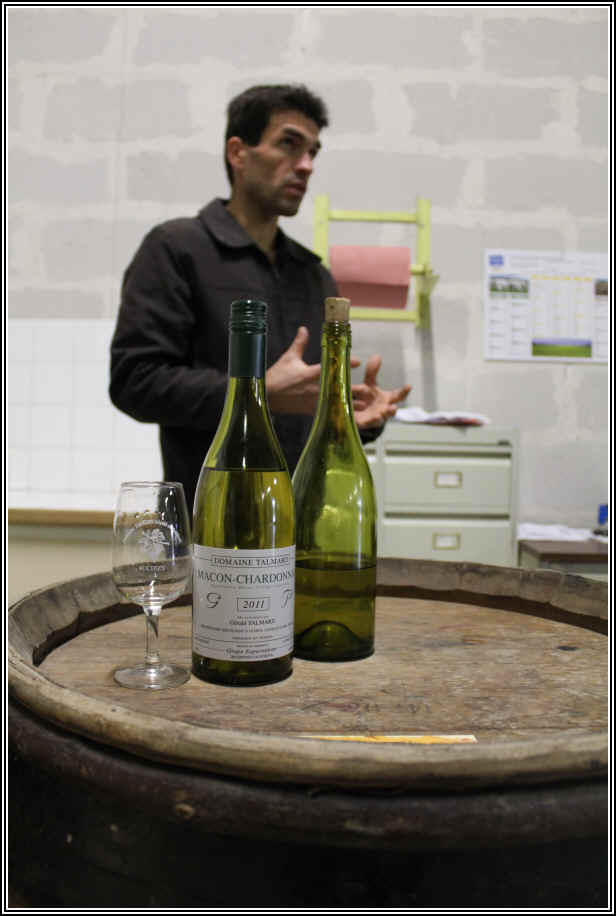 That may be the only oak barrel in the cellar...and it's used as a table, not for aging wine.

Comtesse Marion is $11.99 and comes from the south of France...no oak, but it's beautifully aromatic and appley...easy drinking and we've been seeing numerous case purchases by customers who've enjoyed a bottle or two to start...

WE TYPICALLY OFFER A FEW CHARDONNAYS FOR SAMPLING IN OUR TASTING ROOM!