THE WORLD OF BEER
We have many interesting and unusual beers for the connoisseur or casual imbiber.

Beer-drinking in the San Francisco Bay Area has come a long way over the past 30 years.   I remember we used to have a stack of "Hof-Brau" Beer in Quart bottles stacked on a display by the front door.  Three quarts for a dollar!

In the "old days," Coors beer from Colorado was a "cult" beer.   We used to have customers from various parts of the eastern U.S. stop by to get a case of Coors, which we had to wrap up with a few yards of twine so they could carry this precious liquid back home.

In those days the big brands, along with Coors, were Olympia (known as "Oly"), Hamms (they used to have a magnificent beer glass sign which lit up San Francisco (in more ways than one, I suppose), Lucky Lager and Burgermeister (Burgie).  Nobody had heard of Budweiser!

People who were looking for a "special" beer bought "Imported" beers.   Heineken.  Tuborg.

Today it's a different world!  We now see exceptional beers from around the world.   But not only that, exceptional beers are brewed all over the West Coast.  From Seattle to San Diego, there are "micro-brews" being crafted everywhere.

We have a broad selection of beers, but as with our wines, we prefer to offer "quality" first.  Shelf space is limited, so we don't have an encyclopedic selection.  If there's something special you're looking for, please send me a note and I'll try to find a case for you.

The range of flavors in beer is probably as broad as the range of aromas and flavors in wines.  If you're conversant in "wine-speak," here are some similarities:

Otherwise....here are some suggestions of interesting, high quality beers we typically have in stock.......

AFFLIGEM DOBBEL
This beer is made in the style of a Trappist beer.  The De Smedt brewery was recently sold to Heineken, so it will be interesting to see if they tinker with the recipe.  This is a marvelous brown ale with a touch of sweetness.  It comes in 25 oz. bottles, so be very thirsty or share a bottle with a friend.  Fasten your seat-belt, too.

STELLA ARTOIS
Artois is a place in Belgium and "Stella" is the word for "star."  It is Belgium's most well-known beer, being exported around the world.  I think they even brew under license in certain locales, so better check your bottle to see if it's really Belgian beer.  At the present time the stock here in California is from Belgium.  You'll see Stella all over Europe and the name is used as a sponsor for various athletic events around the continent.  It is comparable to a good Pilsner, being light and mildly bitter.  The 12-ounce bottles are offered in 6-pk format.

The tale of Hoegaarden is interesting, the town of that name having been a major center of brewing as far back as the 1500s.  The nearby farms were cultivating barley, oats, beets and wheat.  Well, of course the wheat and barley are used for this beer, but, at one time oats were also incorporated into the beer.  What makes this beer so distinctive is the use of coriander seeds and dried orange peel.  The fellow who brought this brewery back to life sold it to Interbrew and is now busy making beer in Texas!  Some say Hoegaarden isn't the same as it was in the 1970s, but it still is a distinctively different, moderately hazy, flavorful beer.

There are but six Trappist breweries scattered around Belgium.  We have several beers from these monasteries.  Perhaps the most famous (world-wide fame, anyway) is Chimay.
The monastic order here stems from the Abbey of Citeaux in Burgundy, France.
Brewing started here in the mid-1800s.  The order also is famous for its cheese production.
We feature Chimay "Rouge" in the small, 12-ounce format (we can special order their other beers or the 25-ounce bottles, if you like).  This is a lovely, very flavorful beer with a hint of a sharp spice note (nutmeg, perhaps?).  You'll want to allow this beer to warm up from refrigerator temperature to about "cellar temp," 55-60 degrees.  A fine beer for roasted or stewed red meats, some claim this ages gracefully.

The logo to the left is the one you'll find on the bottles of beer sold around Europe as "Budweiser" from a brewery in the Czech region of Bohemia.
The city known in German as "Budweis" and in Czech as "Cesk Budejovice" was the home of many breweries once upon a time.  Today there remain two.  One is Budweiser Brgerbru and the other is Budweiser Budvar.
The Anheuser-Busch firm in St. Louis, Missouri called its beer "Budweiser" way back in the late 1800s.  The Budweiser Budvar brewery dates back only to 1895, so there's a likelihood that the American brand has been around longer than the Czech.
I see the Czech beer on my travels in Europe.  It's an all-malt beer, whereas American Budweiser has rice added to it.
In any event, "Czechvar" has arrived in the U.S. and we now have it in stock.   Make your own comparison.

This brewer is situated in Mendocino County...Fort Bragg, right on the coast.

They've been around since 1988 and make some exceptional beers. 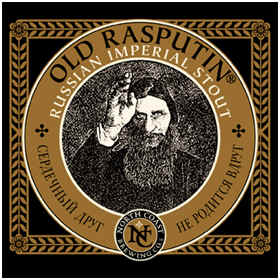 OLD RASPUTIN is a marvelous Russian Imperial Stout.  It's black as night in the glass and moderately bitter...

It's not a beer you slam down as a thirst quencher, but a beer to savor and contemplate like a fine wine. 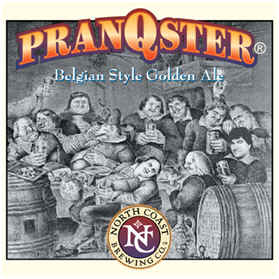 Now Pranqster could be a major thirst quencher on a hot day.

It's beautifully floral and fruity... 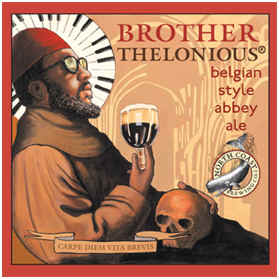 North Coast hands over some of the proceeds from the sale of this beer to the Thelonious Monk Institute of Jazz.

This is a big, full-bodied brew...dark in color and with dried cherry notes and a raisiny note...it's got a bit of sweetness and it's a beer you might want to share with someone as finishing off a full bottle of the 9% alcohol brew is a challenge.

The Kona Brewing company was founded by a father & son team on the Big Island of Hawaii.

For years the big brand of island brew was Primo, but now, finally, there was a more artisanal beer.

We actually visited their warehouse-like facilities some years ago when the company was rather new...and they made good beer.  It's still a rather nice, refreshing brew.

"Fire Rock" is typically in stock at the store...

ABITA BREWING
This company began about 30 miles north of New Orleans back in 1986 and, my, how things have grown!

We have their Amber beer...it's reminiscent of a German lager with a mildly malty character.

You can easily pair this with a backyard barbecue as long as you're grilling sausages and maybe some crayfish.

A bunch of Rogues founded a little brewery and pub in Ashland, Oregon back in the late 1980s...over the years, things have totally gotten out of control and they're making a wide range of interesting beers as well as some spirits!

They have nearly two dozen beers...we carry the DEAD GUY ALE.  Some people think this is made in honor of the music group, The Grateful Dead.  But it was actually first brewed for the November 1st celebration of The Day of the Dead.

Some experts describe this as a Maibock-styled beer. It has notes of honey and caramel with a faintly raisiny note to it.  The sweet aspects of this fade when you pair it with well-seasoned or spicy foods.

Fasten your seatbelt, though, It's a bit potent.


We can order other Rogue beers for you.

Green Flash is another one of the myriad of San Diego-area breweries and they make some really interesting beers.

A couple who owned a beer bar decided to try their hand at making beer.  They eventually brought on board a fellow to oversee brewing and the brand has taken off ever since.

We carry their Le Freak...it's made with a combination of yeasts and so people say the resulting brew is a bit freaky and schizophrenic.  One one hand there's a Belgian Ale sort of tone and on the other experts mention American IPA character.

It's a fairly high-octane brew with some orange peel notes and candied orange...maybe a touch of lemon...and then there's a note of spice with a 'hot' kind of clove note.

Drake's began back in the late 1980s when a fellow who brewed beer in the East Bay brewery called Triple Rock went scouting for a new location to make kegged beer.

The Triple Rock owner and the beer-maker found an old Caterpillar tractor warehouse in San Leandro and they set up shop there.

Well, these days they sell beer in bottles, as well as in kegs and the place makes quite a nice range.

The Denogginizer is a bit of a calling card for Drake's and it's a lavishly hopped beer.  Citrusy notes dominate, but you'll probably detect a resiny, almost pine-like tone in the background which gives this its particular character.