Dick and Nancy Ponzi used to live a few miles south of us in the Santa Cruz Mountains.  Dick's family had produced home-made wines when he was a kid and he decided he ought to revive the "tradition" so he and the Mrs. picked grapes in a vineyard cultivated by the Jesuits at the Novitiate in Los Gatos.

Even with this hard work, they were still smitten with the wine "bug."  Even worse, they had discovered something called Pinot Noir.

So, Ponzi turned his back on a career of designing rides for an enterprise called Disneyland and embarked on a life's journey that is simply delicious!

Dick and Nancy scouted potential viticultural areas with the idea of planting Pinot Noir.  The Santa Cruz Mountains may have been fertile territory, but masochists that they are, the decided to move the burgeoning Ponzi clan (they had three little kids by 1970), lock, stock and barrel to Oregon's Willamette Valley.

Dick explained a major key to Pinot Noir is, of course, the climate.  California, he felt, was too warm.  He explained to the assembled group of San Francisco wine luminaries (that's why I was wondering how come they invited me) about his planting Pinot Noir and carefully tending the vines.

He did whatever his neighbor did.  But his neighbor was growing hazelnuts and figured Ponzi must be out of his mind to plant grapevines in Oregon.

They harvested their first crop in 1974 and attempted to make wine.

"I remembered what my parents did to make wine.  We used buckets instead of pumps and did things like treading the grapes with our feet.  It was very low-tech." Dick explained. 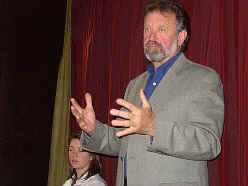 I wanted to ask if he's been plagued by athlete's foot and if he has a good podiatrist, but managed to refrain from embarrassing myself.

We began with the first "flight" of wines, the vintages made by Dick and Nancy's daughter, Luisa Ponzi.

Dick emphasized the climate is of utmost importance in producing Pinot Noir.  "Secondly, the technique of production is critical and this took about ten years to get a handle on that.  In the 1980s we tweaked the process, especially with respect to viticulture."

"Luisa will take the credit for the recent vintages and I'll take the blame for the earlier ones." Dick said, modestly. 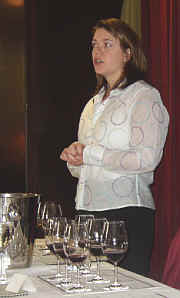 Luisa explained a bit about her winemaking philosophies and spoke about the vagaries of each vintage we had presented in this first flight of wines.

"We chose a number of vintages, not because they're necessarily the best, but because we wanted you to have a good view of our wines." she said.

"My job," Luisa explained, "is to maintain the quality of wine my father established.  I have access to more clones of Pinot Noir and more types of cooperage, for example."

We then set about tasting the wines.
Happily, I didn't take a parking place at the 24 minute meter I had seen vacant on Mission Street! 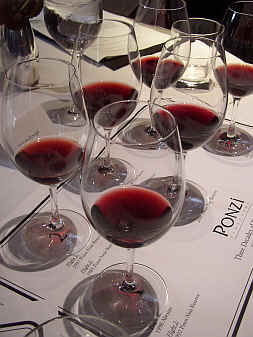 1998 ABETINA PINOT NOIR
This had a gorgeous nose!  There's a lovely forest-floor quality and some nice woodsy tones.  A bit of dark cherry fruit is enhanced by some sweet brown spice notes.  I especially find Ponzi Pinots to have a bit of clove to them and this one is nicely intense.  There's a touch of a sweet pipe tobacco fragrance as well, followed by a kirsch-like note.
This single-vineyard bottling is not made every vintage.

"We make it when we can take it out of our 'reserve' wine and not rob it of its character and quality." Luisa told us.


1997 RESERVE PINOT NOIR (from magnum)
We were told the "critics" didn't like this vintage.  "It garnered rather negative reviews," said Luisa, "but I'm quite pleased at how it's developed.  It's not the fullest, but it's beautiful."

This wine struck me as a bit 'quieter' than the 1998 Abetina, but it is lovely.  There are some leafy notes with the spice tones mentioned above.  A touch of a mushroom element makes for a complex wine.  There's a modest amount of tannin, but it's not astringent enough to be bothersome.  Very nice.

1996 RESERVE PINOT NOIR
I found this to have some nice berry fruit, with a fairly deep bouquet.  The fruit is not as intense as some other wines, but there's a nice texture on the palate and mild tannins.  Still youthful.  Good wine.

Luisa explained the 1996 vintage was inherently "soft."  "We made very little reserve wine since few lots had the 'guts' to merit the Reserve designation." 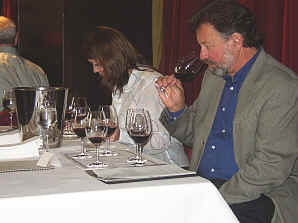 1994 RESERVE PINOT NOIR
This is a terrific wine.  There's a woodsy aspect to the fragrance with some peppery spice notes.  Lightly smoky and mildly tannic (still).  Really good on the palate.  Plenty of cherry-like Pinot Noir fruit and cola notes with a bit of oak.

Luisa told us "It's a warm vintage but I like it.  It was gorgeous upon release and it's gorgeous now, as it's taking on a more earthy side of Pinot Noir." 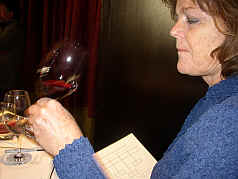 Nancy Ponzi savors a taste of her daughter's work.


1993 RESERVE PINOT NOIR
I found a lightly jammy element in this wine and a touch of Lepage glue.  It's mildly woodsy and a bit on the lighter side, so the wine has multiple personalities.  One one hand there's a ripe quality, yet it doesn't seem to have the intensity of other wines.

Luisa mentioned this as her first vintage as winemaker.  "It wasn't very much fun, either.  I recall having a lot of tension.  I never really liked this wine, but it did get good reviews.  There's more red fruit and tart cherry notes.  I'm surprised every time we open this." 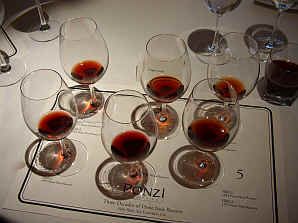 2000 RESERVE PINOT NOIR
Lots of deep fruit notes here.  There's a ripe plum and blackberry aspect to the wine.  Medium-full bodied.  Nice texture.  Plush.  A bit tannic now, in its youth, but certainly cellarworthy (as the other wines easily demonstrate). 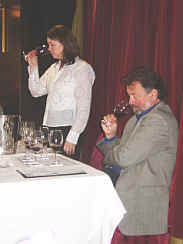 We then moved on to the second flight. 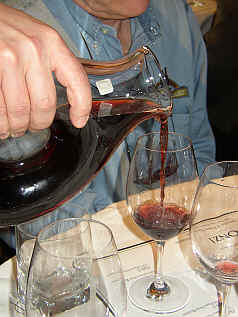 1992 RESERVE PINOT NOIR
Showing nice woodsy notes, there's a touch of a mushroom quality here and a hint of plums.  Dick explained this was a "hot vintage," but the wine is not huge or deep.  It's elegant and refined, with nice balance for rather immediate drinking.


1985 RESERVE PINOT NOIR
This wine is really deep!  It's got a fantastic bouquet with delightfully cherryish fruit.  The wine owes its vitality, I'm sure, to really good acidity.  It's fairly tart and extremely elegant.  There's a mild hint of a leathery Barolo here, but with the acidity of a Piemontese Barbera.  Very fine.

Dick mentioned 1985 as an "historic vintage.  The press discovered Oregon and we, as it turns out, didn't have enough wine for those folks who had been routinely refusing to buy our wines in earlier vintages.  Despite the good qualities of the vintage, it's a year that caused a lot of hard feelings." 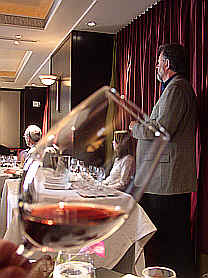 1980 RESERVE PINOT NOIR
Here's a most curious wine: I was reminded more of Piemontese Barolo than Burgundian (or Oregonian) Pinot Noir.  The bouquet is quite leathery and has the classic tar and dried roses quality of mature Barolo.  The wine is quite mature, certainly, though sporting a tannin level a winemaker in the Langhe would be proud of.

Dick pointed out this was the year Mount St. Helens erupted.  "This slowed down the vines' progress quite a bit." 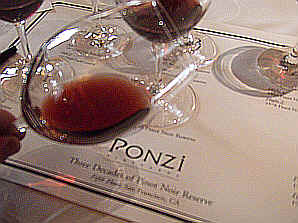 1978 PINOT NOIR
I found a rather intense note of vanilla beans in this wine.  Some berryish fruit, still, amazingly, with a softer, rounder texture on the palate.  Gorgeous wine.

"We had left California for cooler climates and yet 1978 was much like a California vintage.  The grapes tasted over-ripe, but despite the hot growing season, we had ripeness with good acidity.  We just labeled it was red wine.  Now, I guess, you could call it a reserve!"


1975 RESERVE PINOT NOIR
Wow!
What an amazingly good bottle of wine.  The vanilla bean and vanilla sugar is highlighted.  This is amazing.  Still alive.  But more than just alive, this wine sings!  I noticed they made 240 cases of this and sold it, back in the day, for $6.50 a bottle.  I asked Dick if he had any more and if he'd take the five dollar bill I had in my pocket.

After all this "hard work," we adjourned to the dining room of the famous (and deservedly so) Fifth Floor Restaurant. 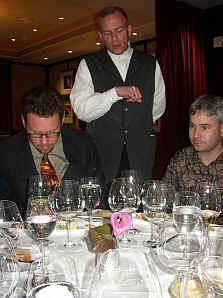 Wine man Chris Miller checks out the first course, while the server explains this intricate plate.  Northwest wine ambassador Tom Elliot is, quite obviously, still in a state of shock after tasting so many great Ponzi wines. 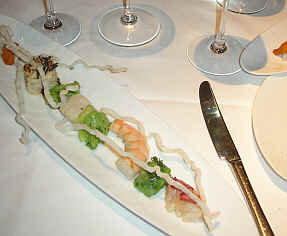 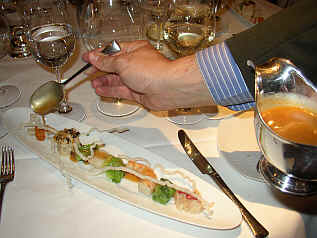 This was further embellished with a rich Pinot Gris reduction.
Thoroughly delicious!

The next plate featured Swordfish: 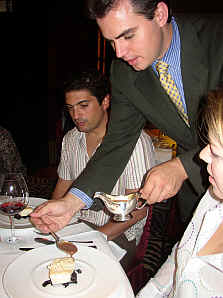 Luisa Ponzi admires the work of this fellow who carefully and with precision, adds a "Pinot Noir Bordelaise Sauce" to the plate. 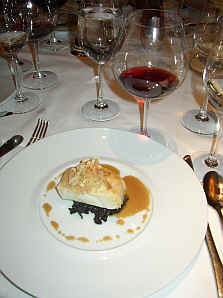 The Swordfish is served atop a bed of black trumpet mushrooms with a 'salad' of enoki mushrooms on top of the seafood.

A 2001 Ponzi Pinot Noir (regular bottling) was served alongside, a most elegant wine.

As the hour was getting late, Fifth Floor Chef Laurent Gras was prepared and offered the participants a "dessert box" of mini desserts "to go."

What a treat!
The Ponzi family should be mighty proud of its efforts in making wine and in promoting Oregon wines, in general.
These rare and treasured bottles were a major treat, proving to be thrilling wines.


Back to our page on Oregon wines.