TOURING IN THE ABRUZZO REGION OF ITALY

I finally had the opportunity to drive a bit around southern Italy and was enchanted by the landscapes of the Abruzzo region. 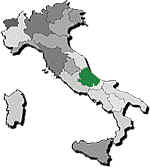 If you think of Italy's mountainous regions as being exclusively in the north, such as the Alto Adige, the Abruzzo region will be quite shocking.  This is a land of mountains and hills.  There are nearly no flatlands in this area.

There's skiing in the winter...
http://www.regione.abruzzo.it/turismo/monti/piste/sci_alpinismo.htm

http://www.regione.abruzzo.it/turismo/en/winter/index.html
This link is in English...


The wine of the region is plentiful and, often, inexpensive.  Two producers dominate the landscape from a connoisseur market standpoint:  Edoardo Valentini and Gianni Masciarelli.  But there are many other producers whose wines can be delightful, so you won't have trouble drinking nicely in this area. 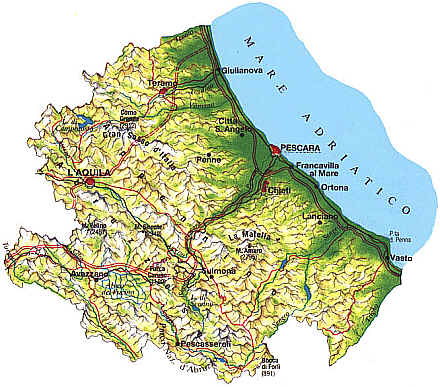 The region, compared to other parts of Italy, is sparsely populated.  One reason for the low density population is there are three major national parks in the Abruzzo.

http://www.parcoabruzzo.it/
This link will take you to the web site of the major national park.  It's in Italian, though there are plans to post an English version.

The Maiella or Majella park is the newest in the region.  Its web site does have an English version...


In visiting the Abruzzo region, I stayed at a lovely place called Villa Maiella.  This is on the outskirts of the town of Guardiagrele.  They have an interesting web site:
http://www.villamaiella.it/

The hotel is rather spartan, but comfortable.  There is a small parking lot below the hotel and this is off the main road.
More notable, however, is the restaurant.

On a mid-week evening during March 2004 I found the dining room rather busy.   As I had "reserved" a seat, the restaurant had placed a name card with my name on one of its tables.  With the menu, I received a glass of Prosecco "Rustico," a lovely, fizzy Venetian white wine. 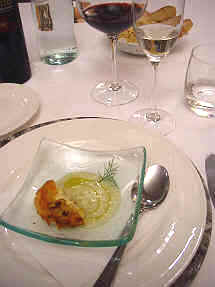 They automatically bring a small plate to start, a Frittata with a fennel cream.

I wanted to try a new wine, so the server suggested a Sarchese Dora 2000 Montepulciano d'Abruzzo "Rosso di Macchia."

A first plate of Smoked Duck with Sliced Apples was delicious. 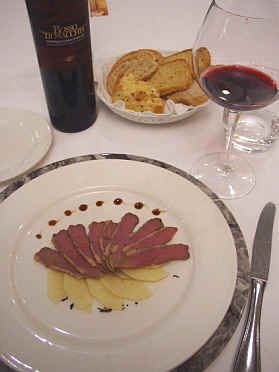 The smoky quality was very mild.

The Abruzzo region is famous for pasta, so I ordered one called "Chittarina," a sheet of pasta that's cut into thin spaghetti by pressing it against what are, essentially, guitar strings. 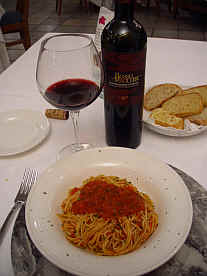 This was served with a lovely tomato sauce and fresh herbs.  Superb!

For a main plate, I'd read about various saffron-seasoned dishes being typical of this area, so I ordered Rabbit with a Saffron Sauce. 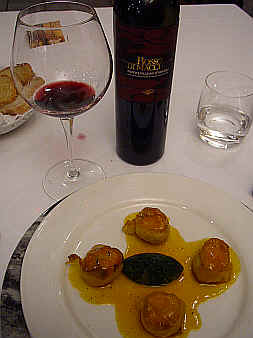 I did not find the saffron to be especially intense here, but the rabbit was delicious.

The restaurant owner was curious about my having contacted them via the internet and my coming from San Francisco.  I explained I was in the wine business and he told me another table was schmoozing an American fellow, an importer, I think.  They would be showing him some of their production and he would bring me a sip of their wine.

I tasted a lavishly oaked red that could have been a Spanish with about three times the amount of wood as a normal Rioja.  I mentioned it had a lot of American oak to Villa Maiella owner Giuseppe Tinari.  He inquired about the wine and was told "Oh, no!  We matured this wine exclusively in French oak!"  All I could think was the barrel builder sold them French oak on the invoice, but delivered badly seasoned wood or whiskey barrels.

The place, which has an extensive wine list, features some thirty offerings for dessert by the glass!  I opted for their Semifreddo al Torrone con Salsa di Gianduia. 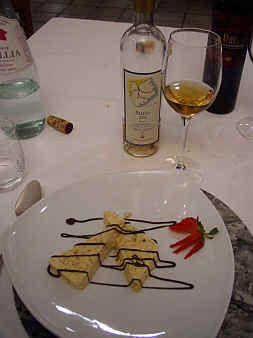 A local dessert wine was selected, a Zaccagnini Passito Bianco.   It's an IGT designated wine with the denominazione of Colline Pescaresi.  The restaurant folks told me it's a blend of Malvasia & Trebbiano, but further research shows this to be, more likely, a Moscato.

The following morning I had a good cappuccino in their breakfast room (fresh oranges and a machine to extract the juice!), along with a croissant (kept in a special warmer) and I departed, paying all of 95 for the room, dinner and breakfast!

I was visiting the fabulous winery of our friends Gianni & Marina (Masciarelli) and they said we ought to go to lunch.  So, after visiting the cellar and vineyards, along with a "new" castle (a place that's hundreds of years old), we drove to lunch.
Back to Villa Maiella!

Marina was a bit surprised when I said hello to Giuseppe Tinari as though we were old friends.

We sat down for lunch and Giuseppe gave me a wonderful gastronomic tour of the Abruzzo region. 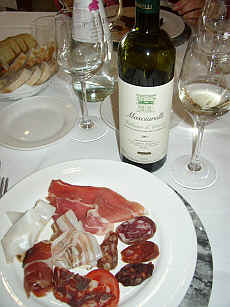 A plate of salumi of the region.  Paired with a taste of the simple, crisp little Trebbiano from Masciarelli, this was delightful.

Next: a spaghetti-like pasta with Masciarelli's deliciously dry, fruity rosato of the 2003 vintage. 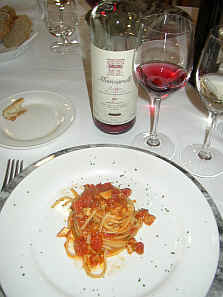 Gianni Masciarelli started with a simple salad, adorned at the last moment with some aceto balsamico. 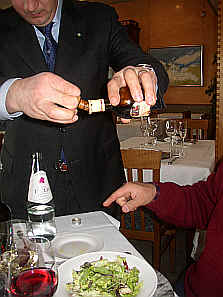 Gianni also ordered a bistecca.  They asked how thick it should be cut. 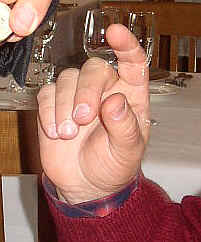 Meanwhile, I was brought a second plate of pasta. 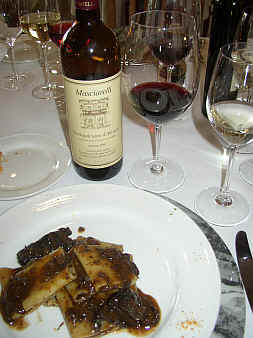 These are called "Paccheri"  It's a tubular shaped pasta, about an inch in diameter, but falling 'flat' once cooked.  The sauce is a cinghiale (wild boar) sauce...a delicious combination with Masciarelli's "little" Montepulciano.


Masciarelli has a special barrel room for a Trebbiano (22 months in wood) and a Chardonnay (23 months in wood!).
So we had to have a taste.  Both wines are terrific.  An older bottle of Trebbiano was quite good...I'd not have imagined 6 year old Trebbiano with that much wood age would be still alive. 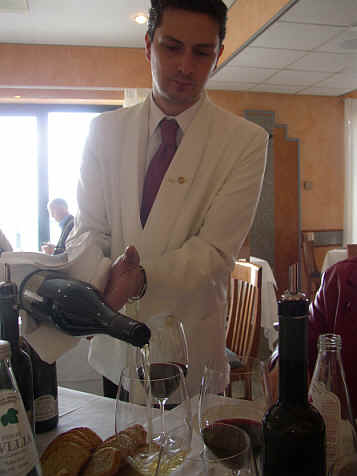 A main plate of lamb was sensational with the deluxe bottling of Montepulciano, Marina Cvetic 2000. 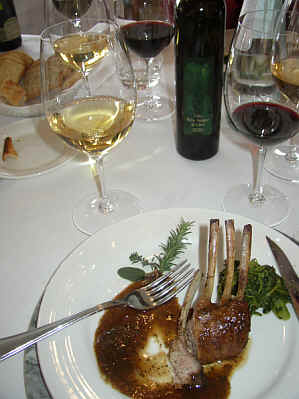 The bottle in the background is not wine, but a special olive oil from an azienda Masciarelli owns.  There are a several oils and I preferred the more deep, green and spicy one.  Oh, Gianni's bistecca has to be close to a pound-and-a-half of beef and it was delicious.  They are not afraid to use salt in Italy, by the way. 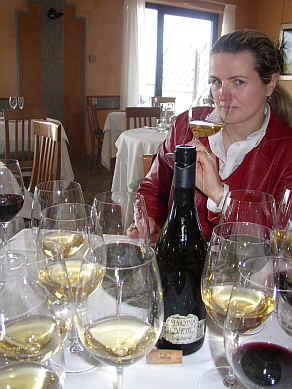 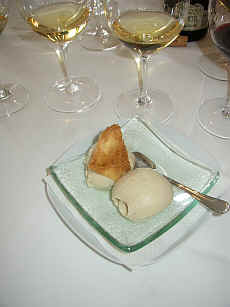 This was a truly special place.  If you're in the vicinity, it's well worth a stop.
The cellar is impressive, by the way. 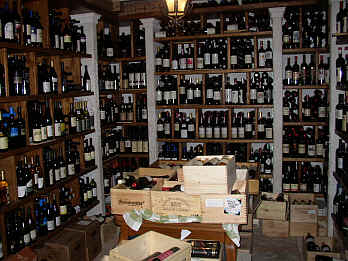 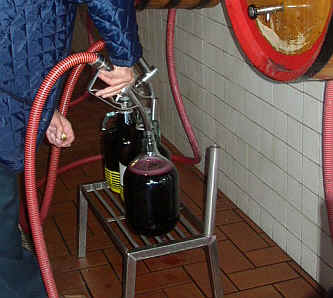 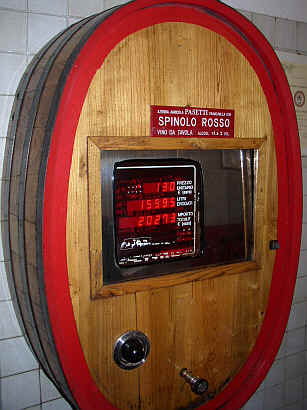 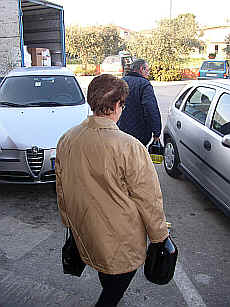 Too bad I didn't have more time in Abruzzo to explore, but Tuscany was calling and I had to drive 450 kilometers and get there in time for dinner!

BACK TO OUR MAIN ITALIAN TOURING PAGE