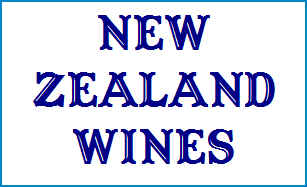 Winemaking in New Zealand is a relatively new idea, though there have been vineyards in the Auckland area since the turn of the century.   That's the 20th Century, by the way...

Today we're seeing a wave of New Zealand wines arriving on our shores.

Many are quite pleasant.  A handful are actually worth the price they put on them.  It's not the growers or wineries with the high prices, to a large extent.  Many American importers, eyeing the high prices for domestic wines, feel they can profit handsomely with optimistic numbers on the shelf for their wares.


A slightly disturbing trend is for wines with a modest amount of residual sweetness.  A trade tasting featuring more than 20 New Zealand wineries offered few stone, bone dry white wines.  We were disappointed by the small number of "connoisseur-quality" wines, as many seem to be catering to the wine-drinker who's "graduating" from Californian White Zinfandel or Big Producer Chardonnay.

Some of the world's large wine companies are now working in New Zealand and this is bringing a lot of "mass produced" wines to the market.  As a result, we're seeing wines made at the direction of accounting departments and marketing geniuses, rather than by dedicated grape growers who have an understanding of what makes a good bottle of wine.

Still, though, there are many good, smallish, family-operated wineries in New Zealand.  There are many areas where no vineyards have been planted.  Yet.

Some of the best wines are coming from regions where people though good quality wine could not be produced.  So, who knows what the future holds?

We're betting the best is yet to come.


As the country is comprised of relatively small islands, the growing conditions are marine-influenced.  Yet given the length of New Zealand, the climate ranges from that similar to Germany at the cool,  southern end of the country, to that much like some rather warm areas of Spain in the north.    We tend to think of New Zealand more as a white wine-producing region, yet a few red wines have caught our attention recently.

Auckland's wine regions are to the northwest and west.  It's possible for Cabernet to ripen in this area.  Presently there are more than 100 wineries making wine in this region.

Waikato and the Bay of Plenty are primarily dairy and cattle lands, though some viticulture has taken root here.  Waikato tends to be more humid, so it may be possible to produce interesting botrytis-affected wines here.  There are 13 wineries there presently...

Gisborne is a rather fertile region with but 19 producing wineries. Sauvignon Blanc, Chardonnay and Gewürztraminer thrive there.

Hawkes Bay is an important region, as it was the first major commercial wine producing area for New Zealand.  There are numerous producers there (76 as of 2014), currently, but only a couple have wines in our market.

Martinborough, near the southern tip of the northern island of New Zealand, is relatively recently a major wine producing area.  There are now about 20-something wineries there, the Ata Rangi winery making an extraordinary Pinot Noir of which we receive a few bottles annually. This is an area with gravelly soil, fairly dry climate and a will to experiment.  Syrah and Sangiovese are recent plantings, so we shall see!

Marlborough lies at the northern tip of New Zealand's south island.  It's only since the 1970's that the region has been a wine-growing area.  Cloudy Bay winery is probably the best-known producer around the world, but there are more than 150 other wine-making concerns in this area today.  Sauvignon Blanc is the major ambassador from the region.

Nelson, Canterbury and Otago are other regions on the south island.  These are less well-known at the present time.
The Central Otago appellation has been getting good press for its Pinot Noirs.  We've tasted a number of wines from this area and find it to be "promising," but can't say winemakers in Burgundy or the west coast of the U.S. need lose sleep over the potential competition.  It's a region which will probably produce really good wines every-so-often, but not year after year.

New Zealand has 675 wineries presently (down from 699 a couple of years earlier).
In 1996 there were some 7,800 hectares of vineyards.   As of the end of 2009,  something like 31,964+ hectares were planted with grape vines!
As of 2016, that figure has hit 36,192 hectares...
More vineyards and slightly fewer wineries what with consolidation and big drinks companies taking over other brands.