The Tasting Room is presently closed due to the Governor's mandate
about closing "bars."
Thanks for your understanding.

The town of Verduno was long below-the-radar for many Barolo aficionados.

These days you can find a number of top wines from vineyards in that region and the Monvigliero
"cru" is well-regarded.

Producers such as Burlotto and Fratelli Alessandria are making good wines as is this venerable
property.

We're pouring their "normale" Barolo, a small production wine from a vineyard called
"Boscatto."  But the wine doesn't carry any sort of vineyard designation.

The juice spends about three weeks on the skins during its fermentation, so it's in between the
real "old-timers" and the so-called "modernistas."

This is nicely balanced and you can enjoy it tonight, but it will be fine in the cellar for
another 5 to 10 to 15 years.

This is a new venture for some people who own a 9 acre vineyard in
Sonoma's Dry Creek Valley.

They hired a consulting winemaker (Larry Levin) who worked
at the Dry Creek Vineyard when he was a really young buck.

He also worked for Mount Veeder and Quintessa in Napa.

We tasted several vintages of this Owl & Oak Cabernet and unanimously
chose the 2013 vintage over the more recent 2014 and 2015.

It's a remarkably fine and elegant Cabernet while retaining its
Sonoma character with Napa complexity.

She works for a number of wineries and her Cabernets at Paradigm have
been quite good.  The 2015 is maybe a tad softer than previous vintages.

Charleux is a father & son team making some exceptional Burgundies in the southernmost
part of the Côte de Beaune.

Santenay is perhaps their most regal red wine and the 2016 is very fine.
We like the dark cherry fruit and this is framed by a mildly woodsy note from
its maturation in small oak barrels.

Pewsey Vale's special Riesling called "Contours" is one of the most enjoyable
Rieslings in the shop.

It's typically released when it's had some time in the bottle to develop, so if you like
those floral and petrol notes of nicely matured Riesling, don't miss this.

We paired two vintages with homemade Crab Cakes recently...we had a bit
of chili pepper spiciness in the crab mix and the wine was superb in this
context.

One of our guests, a prominent New Zealand winemaker, was absolutely
delighted to see this on our menu that evening, saying it's her all-time
favorite Riesling.

This is dry and crisp, too, by the way. 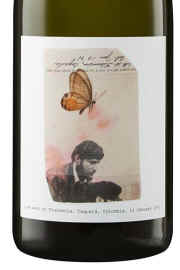 We can't quite call winemaker Kent Humphrey an old-timer, but
he's been at it for more than a decade.

His wines are routinely good and this 2017 Chardonnay is very fine.
It comes from two vineyard sites in Sonoma...they made just
169 cases...

1 KM West is its "title" and, as usual, features marvelous art on the distinctive label.

Happily the wine is even more artistic.

Winemaker Jay Heminway passed away in 2019, but his daughter is carrying on in his foot-steps.

They are famous for this gentle style of Zinfandel...it's fairly smooth and has dark berry fruit with
some brown spice notes.

Carricante is the grape...and it can make a remarkably good bottle of wine in the right hands.

Some of these are tight, lean and cellarworthy.

The Alta Mora is immediately showy...crisp, bone dry, mildly stony/minerally...you can sense
its volcanic "terroir" right from the start.

No oak.
Doesn't need any.

The Rochioli family has been growing grapes in Sonoma's Russian River Valley for decades.

The 2018 was matured for about 9 months in French oak, 25% of the barrels being brand new. 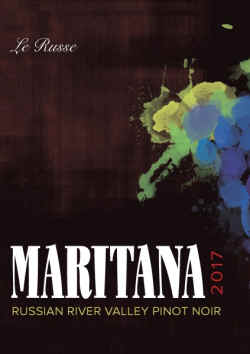 Donald Patz was a founding partner in Patz & Hall, a Pinot and Chardonnay specialist.

When the partners sold the winery he embarked on another adventure, this one called
Maritana.

We had our reservations but are delighted to report this Pinot Noir is excellent.

Trefethen's vineyards are in the Oak Knoll district of Napa, a slightly cooler region.

This makes for a nicely elegant rendition of Cabernet, beautifully balanced.

Trefethen has been making good Cabernet for decades.
This 2016 is a cut above their normal efforts.

They make a relatively low alcohol, crisp, tangy Sauvignon Blanc which
is really snappy and fresh...heck, it ought to be: it's fresh out of the
fermentation tank...this is a 2018 vintage!

This is a crisp, delicious cocktail white and it's dynamite
with seafood, dim sum and other Asian-styled dishes.

We have been impressed by several vintages as the wine captures the spice notes we find
in benchmark bottlings from France's Northern Rhône.

There are some Walla Walla wineries making seriously expensive Syrahs of impressive quality.
We might say that Proper is properly priced.

Dehlinger makes some terrific Chardonnay and Pinot Noir wines.
The 2017 is exceptional Chardonnay...displaying lots of toasty notes from its
time in French oak.

The new owners at Heitz Cellar have bumped the price of the Trailside Cabernet by
a few bucks.

The 2013 is exceptional, coming from the old Shown & Sons vineyard which is located
along the Silverado Trail in Rutherford.

As usual, this displays an exotic and complex nose.

Come have a taste!

This is routinely one of our favorite, off-the-beaten-path dry white wines.
We brought a double magnum of the 2016 to dinner during the
San Francisco International Wine Competition and it was a hit with the
judges (from all over the world, too).

We brought this vintage recently to dinner with some friends at Dumpling Time in
San Francisco...thoroughly delicious!

Stony, nicely fruity with a hint of a spice note...

In a recent blind-tasting of New Zealand Pinots, Kevin Judd's was my top pick.
It's beautifully intense with lovely dark cherry fruit and just a hint of sweet oak.
Very showy and easily comparable to top Sonoma Pinots.

A delicious blend based on Chardonnay, but it's the Sauvignon Blanc that
really sings here.
The wine sees some large wooden tanks and it's beautifully aromatic.

Don't miss it...everyone who has tasted this has given it a
"thumbs up."

Carla Benini farms her vineyards organically and the blend for this charming wine
has evolved over the years.

This vintage is based on, as always, Sangiovese.  But it has a fair bit of a red grape more
normally found in her home region of Trento: Teroldego.

It's a unique blend and displays lots of cherry-like fruit.

Very fine and yet very affordable.

It spends a few months in new French oak, so there's a touch of sweet
wood spice to this wine.

Raspberry fruit notes and that hint of vanilla spice from the oak makes for
a delightful, easy-drinking red. 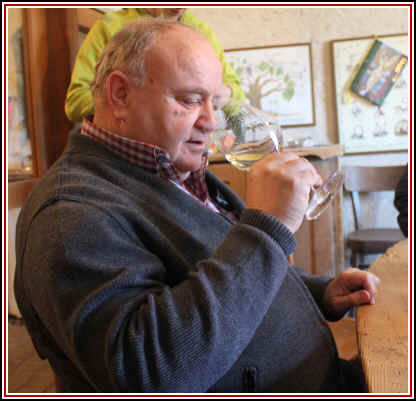 Peter Dipoli is a bit of a legend in his home region of Italy's Alto Adige.

He makes a Bordeaux blend and a Sauvignon Blanc called Voglar.

The wine is a bit intense and perhaps a tad rustic in today's squeaky clean world
of winemaking.  We're trying to say this is not for everyone,
but if you're on the same wavelength with the wine, you'll find it
to be quite satisfying.

Everyone in the Alto Adige knows Dipoli and they all speak
reverently about him and his wines.

We visited his cellar in March of 2018 and he shared some older bottles
with us...Voglar ages quite handsomely and each vintage is reflective
of the growing conditions of its birth year.

Less than 200 cases of this Cabernet Sauvignon were produced...
The fruit comes from the Beatty Ranch on Howell Mountain east of St. Helena.

It's blended with a bit of Cabernet Franc and Petit Verdot.  Matured solely in French oak,
with about half the barrels being brand new.


BINZ 2016 MORIO MUSKAT  $1.30/Taste
This is a small production from our friends at the Binz winery in Germany.
It's intensely aromatic and fragrant, with a touch of sweetness but ample
acidity to balance.
You'll find this wine only at our little shop here in Burlingame (or at the winery).

RAMEY 2016 Russian River Valley CHARDONNAY 3.50/taste
One of our favorite California Chardonnays, this is a wine made with
an astute awareness of French White Burgundies, but with a
decidedly California accent.  Very fine.

John Hart has a good vineyard source in Sonoma and
makes a wonderfully peachy
dry white which captures the essence of Viognier.

A fantastic example of the Pecorino grape...certainly this will appeal to you if
you're enchanted by crisp, non-oaked Sauvignon Blancs.

This is yet another great, flavorful alternative to the "water" that
many commercial cellars bottle as "Pinot Grigio."

Ask Gerald to tell you the story of how he
was instrumental in creating the blend of wines
which comprise this special bottling that's sold solely
in California.

From the Margaret River region in Western Australia...
They make three Chardonnays...this is the middle tier bottling and it's dynamite.
Smoky, leesy and toasty...you have to taste it.

QUINTA DO NOVAL 2011 VINTAGE PORT  $10/taste
The most recently-declared Vintage is offered today for tasting...quite showy now and it
will repay cellaring handsomely.

CASTA DIVA MOSCATEL  "Cosecha Miel"  $5.50/taste
Hugely famous in Portugal and around Europe, they're a mystery to most
wine consumers in the US.  Remarkable wine, though.

SMITH WOODHOUSE 2004 LATE BOTTLED VINTAGE PORTO $3.40/taste
Savvy wine buyers know this brand from the Symington Family (Graham's, Warres, Dow's)
for its killer LBV Port...If you have taste for hundred buck bottles of Vintage Port and are
on a budget, check out this delicious Porto!

DELAS MUSCAT DE BEAUMES DE VENISE  $2.60/taste
From the Rhône Valley in France...this is a simple, aromatic and delicious Muscat.