Austria is a wonderland for good wines!  But it is known only to those adventuresome souls around the planet who seek good wines and who have no fear of mispronouncing the names of unfamiliar grape varieties.

Though Italy and Spain have, these days, more of the center stage of wine drinkers, it is Austria where the quality of wines has skyrocketed rapidly over the past decade.

Austria had been the home of a major production of sweet wines.  Back in the late 1970s and early 1980s, these were an alternative to the more costly sweet wines from Germany.  But that world is long ago and far away!

The Austrian wine industry was dealt a major blow in 1985 when a scandal nailed a lot of wineries.  One jealous vintner blew the whistle and this sound was heard around the world!  It seems a number of winemakers were adding diethylene glycol to their late-harvest dessert wines as a further measure of sweetening them.  This additive is more commonly found in "anti-freeze," so I suppose it's ironic for it to be appearing in wines which might have been sold as "eisweins" (sweet wines made from grapes frozen on the vine)!

The wineries whose wines were found to have diethylene glycol in them went bankrupt.  The government enacted a strict set of wine regulations, as their wine industry was dealt a major blow.

Over the past 20+ years, a new generation of vintner has taken over the reigns of many family wineries.  They've realized their chances for survival are based on quality winemaking rather than "industrial" production.

There are hundreds and hundreds of wineries in Austria today.  More than 5,000 actually.

Near as I can tell, though there is a major critical publication reviewing Austrian wines, the syndrome we've seen in California of intensifying the wines to court a higher numerical score has not taken hold.

California vintners (and Australian, French and Italian, for that matter) have upped the ante, continuing to increase levels of alcohol, oak and, sometimes, sugar in their wines in hopes of receiving higher numerical scores.

We first became aware of Austria's wines when a couple of enterprising vintners sent a letter to the Robert Mondavi winery wanting to correspond with Californians in the wine business.  Mondavi forwarded the letter to the winery trade publication called Wines & Vines and we responded to their missive.  Some months later, Josef and Veronika arrived in San Francisco for a vacation and some winery visits.  I was pleased to be able to visit them at their Thermenregion winery a year or two later.

Meeting my Frankfurt-area friends one visit in Austria ages ago, we stopped to taste 50 or 80 wines at the famous Kloster Und.  I didn't find very much of interest, tasting many poor wines.  But a couple stood out and I bought a bottle of wine from a nearby vineyard called "Malat Bründlmayer."  Little did I know, but Norbert & Gaby had planned to visit this place the following day!!!

I was impressed by Malat's wines and these days he's regarded as one of the major leading lights on the Austrian wine scene.

Today in the San Francisco Bay Area, you'll find many restaurants which feature Austrian wines.  These have excited the local wine cognoscenti, because so many of the wines "work" so well with various cuisines.

The famous San Francisco restaurant "Slanted Door," which features Viet cuisine, has an outstanding selection which are well-suited to the food.  The fancy and elegant restaurant of Gary Danko also has a lovely range of Austrian wines (I think I stunned the sommelier there when I ordered a bottle without his having to suggest it).

The quality of the wines from Austria continues to improve and the future is very bright for their wines.

Austria has some 114,941 acres of vineyards.  Sixty-seven percent are in white grapes.  The predominant, nearly "national," variety is the Grüner Veltliner,

a grape known to nearly none of our customers.  Something like 31% of Austria's vineyards are Grüner Veltliner (and this percentage has dropped over the past decade as winemakers explore other varieties, though it's gone up by a couple of percent over the past few years.

I have tasted hundreds of Grüner Veltliner wines.  I may be the only person in our town to be able to make such a claim.  I can also tell you the quality of this grape can be fascinating and well-suited to pairing with good foods.  One parent of Grüner Veltliner is said to be the Traminer.  And, interestingly, Grüners can age handsomely!  I was in the Kremstal in 2004 and we were presented a "mystery" bottle.  Everyone of the wine professional crowd was impressed by this wine and NOBODY guessed it to be a 50 year old bottle!

A bottle of Mantlerhof Roter Veltliner from the
1954 vintage!
Still youthful, too, at 50 years of age.

Riesling accounts for about 4.3% of Austrian vineyards (it's grown over the past decade).  Chardonnay, which also goes by the name "Morillon,", has become more prominent, going up from a mere 1% of vineyard plantings to 3.5%!  Sauvignon Blanc has found a home in the Steiermark region where it makes amazingly good wines, easily on par with the best from California and France's Loire Valley.  Pinot Blanc is often labeled as Weissburgunder and some very fine examples are here and there.

The major red varieties are the Blauer Zweigelt and the Blaufränkisch.  Zweigelt is the most widely planted red grape.  It is cultivated in all 16 wine areas of the country.  It covers about 13.8% of vineyard lands in Austria and is a cross of Blaufränkisch and St. Laurent.
Blaufränkisch, also known as Lemberger, is the second most important red, but possibly the most exciting local variety.  It seems to really thrive in the Mittelburgenland which has been dubbed "Blaufränkischland."  It comprises about 6.5% of vineyard plantings in Austria.
Cabernet (1.3%) and Pinot Noir (1.3%) and Merlot (1.6%) are grown in Austria.  They're just not widely planted.  Syrah (.3% of total vineyard land) shows promise, too.

And Austria has its share of oddball, obscure varieties, too.
Blauer Wildbacher (also known as Schilcher) is found in the Weststeiermark where it makes high acid, lightly pink sparkling wine.  How about Blauer Portugieser?  Or Blauburger (not to be confused with Blauer Burgunder which is Pinot Noir)?  How about Zierfandler (also known as Spätrot)?  Or Rotgipfler?  Goldburger?  Bouvier?


The Regions of Austria

Sub-regions:  Carnuntum, Donauland, Kamptal, Kremstal, Thermenregion (including the famous wine villages of Gumpoldskirchen and Vöslau), Traisental and the Wachau.

Sub-regions:  Sud-Oststeiermark, Südsteiermark (known as "Austria's Tuscany") and the Weststeiermark.

If you go there, many wineries are open on some goofy schedule.  These are called "Heurigen" and you can spot them by a pine branch or something similar hanging outside.  They serve their own wines in some form or another.  Sometimes these places offer food, from some sort of Austrian "country" or "peasant" fare to a bag of potato chips.  Wines are offered in a variety of ways;  from wine glasses to tumblers.   On my first visit to Austria, we walked (at the beginning, crawling at the end of the evening) from heurigen to heurigen.  Though we had a full dinner, my host and hostess insisted we have something to eat at each and every heurigen room.  Some Austrians are big people. 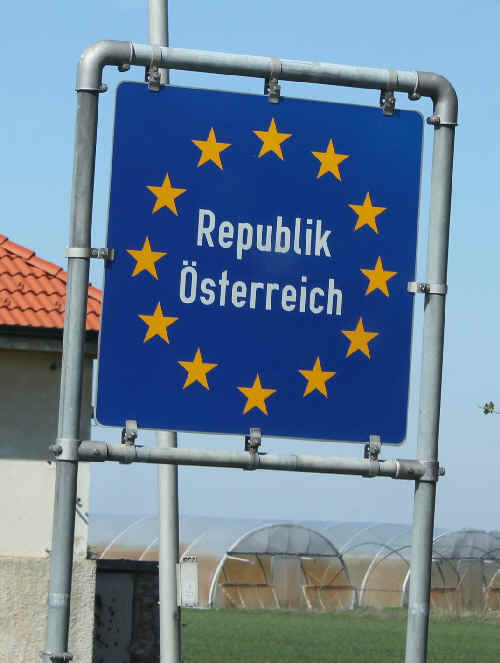 The Talented Silvia Heinrich of the J. Heinrich winery in
Deutschkreuz