Held at the Hotel Nikko, nearly 4 dozen judges (and a veritable army of volunteers) gather from various corners of the countryside on a weekend in one of the most amazing displays of organization one might imagine.

Much of wine tasting involves the ability to swirl the wine in a glass (this shows you're cool and "in the know") without spilling it on yourself (or the judge next to you).  One then nonchalantly sticks one's nose into the glass and has a few short sniffs, avoiding sounding like a Hoover vacuum cleaner in the process.  It's also bad form, I've found, to have wine dripping off the end of one's beak afterwards. 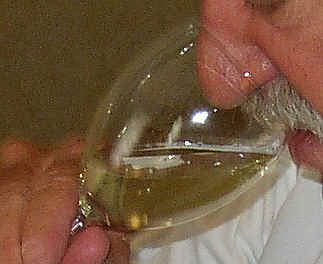 Thousands of wine glasses are at the ready.

Our fearless leader spearheads the effort. 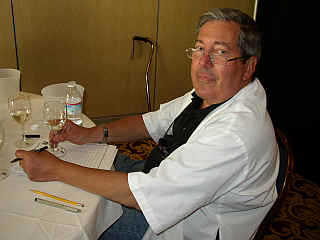 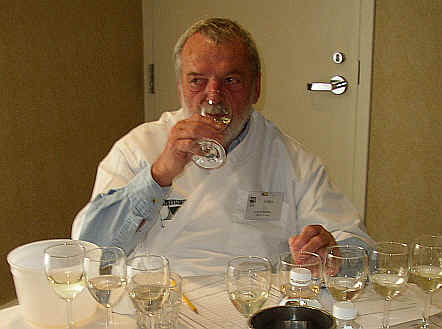 Larry Walker wisely sits near an emergency exit in case a flight of wines is so poor, he can stroll out to Foley's for a pint of ale.

Ann Littlefield shows how to hold a wineglass.  This always impresses the heck out of people who drink wine out of paper cups or straight from the bottle.

Alan Goldfarb is a St. Helena "Star" and works diligently to get to the bottom of the barrel on every wine-related story in the Napa Valley.

Drake McCarthy is a Bay Area fixture in the wine trade, somehow finding time to spend the weekend at this wine judging in between trips to Italy, France, Spain and Bolinas.

It figures a guy named Rusty would be pretty much surrounded by water.
San Francisco's Rusty Albert is famous for his ability to do wine impressions.  (Ask him to do his Asti Spumante or Gros Manseng impressions!)

Upstate New York's famed (or is the proper term "notorious"?) Charles Mara is well-known for various wine critic short-cuts.
"DNPM" is one of them.  Not good news for the winemaker, though:
Do not put in mouth.

Rosina Tinari Wilson manages to smile as she tastes a 1998 Chardonnay that "ought to be in the Fino Sherry division!"

Michael Feil is seen here thinking about his golf game.

A guy named "Cooper" probably looks for wines with the most oak, but Jerry Cooper professes to appreciate wines which have not been matured in barrels.  "I'm not a termite." he says.

KeVINO Vogt likes escaping from Las Vegas because what goes on in SF stays in SF.

Hedy is a master of wheeling the cart full of wine glasses!
She's had a lot of experience.

Also on our tasting panel is Lance Armstrong.

No, wait!  That's Patrick Comiskey who writes with his right hand.

Mister Petite Sirah, Steve Pitcher, is the only wine judge skilled enough to not have to wear a "lab coat."

Joseph Nase has a nose for wine.  Here he's showing off the art of tasting.

Monsieur Robert Kelly O'Connor was quick to discern the wines in this flight were not reds from Bordeaux.

Janet Dyer was especially thrilled to tasted several hundred Merlot wines.
"It's my favorite grape." she explained.  "I keep a water heater full of it at my house and my car even runs on Merlot!"

Country music legend Waylon Jennings also enjoys a glass of Merlot from time to time.  Here he's seen toasting to Janet's continued good looks.
For some reason, though, Jennings is wearing a name tag with "Mendel Kohn" on it.

Someone placed a glass of tomato juice in front of taster Ken McDonald to see if he could tell it apart from some of the Merlots.  He was lobbying for a "double gold."
"Hey, 2002 was a great year for tomatoes!"

Katie Ballou Calhoun was tasting on a panel with Kid Shelleen, I think.  "I'm kinda fonda some of these wines." she told us.

Newsweek's Tara Weingarten (that's her real name...we checked her driver's license to be sure!) looks over her ratings.

A few of the wines we tasted should have a warning label on the bottle!  Maybe even two.

MORE PHOTOS ON THE NEXT PAGE